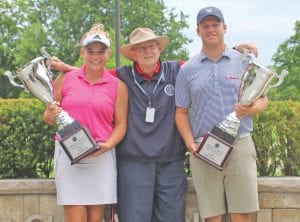 Karsen Johnston and Joe Montpas hold their Mallon Cup trophies at Warwick Hills Golf and Country Club on Monday, after they were presented by Bill Hense, supervisor of the Jack Nicklaus Group in the Flint Junior Golf Association.

GRAND BLANC – Joe Montpas regained the Mallon Cup after a year’s absence and Karsen Johnston gave herself an early birthday present with the girls’ trophy in the fifth annual Mallon Cup Challenge on Monday at Warwick Hills Golf and Country Club.

Johnston, of Davison, carded 4-overpar 76 to edge Grand Blanc’s Cammi Lucia by one stroke on the day before her 18th birthday.

Both are 2016 graduates headed to college golf programs, Montpas to Mott Community College and Johnston to Oakland University.

The Mallon Cup is the second of three trophy events on the Flint Junior Golf Association season. Montpas won the Mancour Cup for the second straight year two weeks ago and also leads the Steve Braun Cup points race by an ever-growing margin. Johnston also took the lead in the girls’ Braun Cup race.

Johnston sank a 15-foot birdie putt on the second hole and chipped in for birdie on No. 12. She also was headed for a 74 until two bogeys in her last five holes dropped her back.

Defending champion Brooke Thomas of Flushing was third with an 81, hurt by shots into the water on Nos. 14 and 17. Goodrich senior Sydni Harding shot 83 and Lapeer senior Baylee Thompson 85.

Mitch Hughes, the boys’ defending Braun Cup champion, was fourth Monday with a 78.

The third and final event in the FJGA’s triple crown will be staged Monday, when the Henrickson Award is contested at Atlas Valley Country Club. The defending champions are Kyle VanBoemel of Holly and Kerri Parks of Flushing.