Flushing falls to Clio in overtime 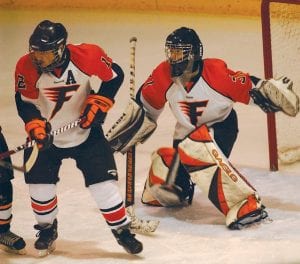 Flushing’s Casey Bradshaw guarded the net with help from Josh Williams (No. 12).

FLINT — The Clio/LakeVille hockey team improved to 8-10-1 overall after edging out Flushing/Carman- Ainsworth, 5-4 in overtime last Saturday at Iceland Arenas. The loss dropped Flushing to 7-9-1 overall.

“Clio played very well and we were missing one of our players and just didn’t have the jump to play with a team that came to play,” said Flushing coach Jon Jepson.

Clio drew first blood at 2:44 off the stick of Steven Callicoat from Cody Delorenzo and Josh Smith. That would be the only goal of the first period.

Flushing answered back at 11:46 in the second when Jordy Makrani burned the net off a pass form Mickey Montpas and Blake Schafsnitz. At 6:42 Flushing got its second goal from Matt Leland assisted by Josh Williams. Clio then had the answer for that at 5:16 when Callicoat scored from Smith. With 54 seconds left in the period, Callicoat got his third goal of the game, this time assisted by Ryan Spears.

Clio kept the momentum into the third period lighting the lamp at 11:23 when Jeremy Voss scored from Ray Auten and Cameron Wolf. Flushing didn’t want any part of that though, and scored two quick goals, one at 5:47 by Drew Sanborn assisted by Leland and Tony Reffert, then at 5:24 from Dan Olson and Leland to force the overtime.

Clio clinched the win in the extra session when Smith took a feed from Auten.