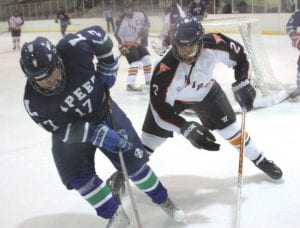 FLINT TWP — The Flushing/Carman-Ainsworth hockey team’s tough season hit another snag at home on Saturday against Lapeer at Flint Iceland Arenas. When it was all said and done, Lapeer left the building with an 8-0 shut-out win.

Lapeer grabbed a 3-0 lead in the first period before scoring four in the second frame. One more in the third period would put an end to the contest.

Jeff Fisher was between the pipes for the Raiders, turning aside 15 of the 23 shots he faced on the night while Lapeer goalie Cody Freigruber preserved the shutout with 13 saves.

The Raiders have faced some tough opponents this season, but no one had been more of a challenge thus far than Saginaw Heritage last Wednesday at Saginaw Bay Ice Arena. The Hawks would take the Saginaw Valley League contest, 14-1, after the mercy-shortened game came to an end in the second period. In the opening frame, Heritage crafted a 10-0 lead before outpacing Flushing in the second period, 4-1.

Flushing’s lone goal of the game came from Joe Montpas in the second stanza and that would be the only offense from the Raiders all night. The Raiders welcomed Midland Dow yesterday after deadline and will be at the Grand Blanc tournament on Friday and Saturday at Perani Arena.