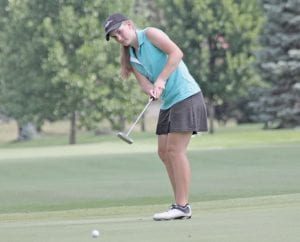 Flushing’s Brooke Thomas putts out on the 18th hole at Spring Meadows Country Club on Monday. Thomas shot 73 to post the girls’ low score in Flint Junior Golf Association play for the third time this season.

LINDEN – The only thing hotter than Brooke Thomas on the Flint Junior Golf Association circuit these days is the weather.

Thomas has posted the lowest girls’ score in three of the FJGA’s five outings this year, including a 69 in last week’s Henrickson Award and a 72 in the Mancour Cup on June 27. Her last two rounds have been lower than the boys’ scores.

Monday’s win gave Thomas the Steve Braun Cup for the season points championship with still a week to go in the regular season. She has 220 points, out of reach of Parks (140) and Davison sisters Kamryn (135) and Karsen Johnston (130), with only 50 points available for next week’s winner.

The boys’ points championship is still up for grabs, after Noah Troyer shot 74 to climb into second place. The Grand Blanc grad has 200 points, 30 behind Flushing grad Joe Montpas, who missed Monday’s outing. Mitch Hughes, the defending Steve Braun champion, is third with 165 points and former Holly teammate Kyle VanBoemel has 160.

The final week of the regular season will be next Monday at Captain’s Club. The season ending tournament will be Aug. 8-10 at Swartz Creek Golf Course.