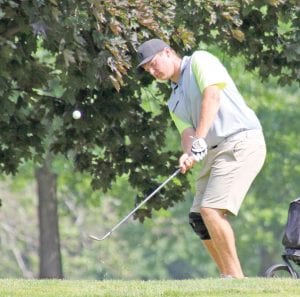 FLINT — Joe Montpas and Kerri Parks picked up right where they left off in Flint Junior Golf Association play.

The Flushing High golfers, defending champions from the 2015 season, posted the low scores in the first week of the 2016 campaign at Flint Golf Club on Monday.

Montpas shot 1-under-par 71 to beat runner-up Noah Troyer of Grand Blanc by four strokes in the boys’ division, while Parks carded 1-over 76 to finish seven strokes ahead of Davison’s Kamryn Johnston.

On a hot but windy morning, the opening day of the 2016 season drew 56 of the 77 golfers listed in the FJGA’s elite Jack Nicklaus Group. Only four of the boys and one of the girls were able to break 80.

The other top scorers in boys’ play were Mitch Hughes and Trent Barth with 79s, Garrett Jewell and Ty Mero with 80s, Nick Bruett and Noah Rocheleau with 81s, Nick Brown with 82 and Trevor Bailey with 83.

In girls’ play they were Karsen Johnston and Sydni Harding with 86s, Brooke Thomas 88, Payton Steinhaus 89 and Taylor Harding 92.

Next week’s competition at Flint Elks Club kicks off the triple crown of FJGA trophy events. The two-day Mancour Cup will be played Monday and Tuesday and offers an exemption into the American Junior Golf Association’s Randy Wise Open in August at Warwick Hills.

The Mallon Cup will follow on July 11 and the Henrickson Award on July 18.