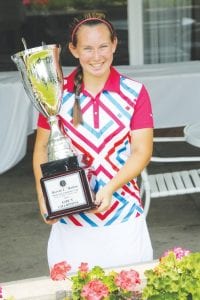 Junior Joe Montpas, 16, won the boys’ championship with a 2-underpar 70, and sophomore Kerri Parks, 14, took the girls’ title with a 5-over-par 80 in the final major tournament of the Flint Junior Golf Association season. The event had been scheduled for July 7 at Warwick Hills Golf and Country Club but had to be moved and rescheduled because of heavy rains.

Montpas is only in his second season of FJGA play and didn’t play in it last summer. But he’s been one of Flushing’s top players since his freshman year and won a Div. 1 regional championship as a sophomore this spring.

A chip-in for eagle on the 302- yard, par-4 16th hole highlighted Montpas’ round and sealed a fourshot victory over Swartz Creek’s Ben Zyber and 2012 champion Jordan Harris of Grand Blanc. Montpas just missed driving the green, then watched a sharp-breaking, 30-foot chip shot curl into the cup to go 2-under with two holes to play. 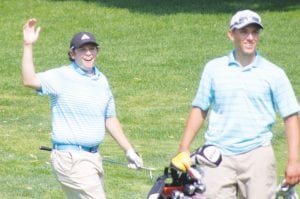 “I made a couple of decent birdie putts early in the round, then missed a couple short ones on the front nine for par, but other than that it was a solid round,” he said. “It’s pretty cool to win this when I’m only 16.”

Parks said virtually the same thing after edging Siena Heights University sophomore Andrea Richards of Davison by a stroke for the girls’ title. Richards, who leads the girls’

Steve Braun Cup points race in the FJGA’s Jack Nicklaus group, bogeyed the final hole for an 81, then had to leave immediately for an 18-hole practice round at Siena Heights. Richards was the university’s top player this spring with an 83.4 average as a freshman.

“It’s really nice to win this because I’m so much younger than everybody else here,” said Parks, who turned 15 this week and also had to leave the course early for a driver’s training lesson.

Parks is in her fifth year of FJGA play and won the 9-hole division championship two years ago. She has been playing golf since age 6 and played on Flushing’s varsity last fall.

The Nicklaus Group will conclude its regular season Monday at the Captain’s Club of Woodfield. The season-ending tournament will be held Aug. 4-6 at Swartz Creek Golf Course, with two days of stroke play followed by match play on Aug. 6.