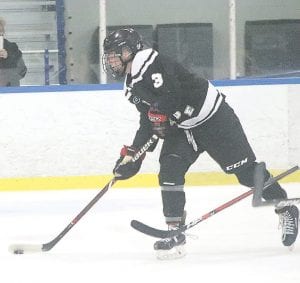 Flushing’s Noah Somers is one of several then-juniors who could move into leadership roles this season as seniors. Photo by Kylee Richardson

FLUSHING – The Flushing hockey co-op will have yet another look, although maybe not noticeable at first glance.

Guzak said as of right now, he has one Goodrich player, Mason Rich, a defenseman. Eleven kids showed up for the practice/tryouts sessions last week. Of those, key this year are senior goalie, Gavin Powers, senior forward Colton Giacombo, senior defenseman Noah Summers and several newcomers, freshmen and sophomores who will fit into the mix once Guzak gets a better look at everyone and their abilities.

“It’s going to be a tough road this year,” said Guzak. “Goodrich coming in this year is not so significant, but middle schoolers are at the rink playing so we hope they don’t bale on high school hockey and we see them. We continue to compete with travel teams.”

Guzak said he wishes more parents and their skaters realized the importance and significance of playing for their high school teams.

“We’re one of the free teams, we don’t charge for playing,” stressed Guzak. “That’s several thousand dollars in savings for families. The schools pick up the tab and it’s one of the main reasons we can continue to offer high school hockey.”

“High school hockey. I really push for my kids to play high school hockey,” said Guzak. “There is a fine line because a Jr. College kid has better exposure for colleges with travel hockey, but less than 1% of high school players ever play D1 hockey or Tier 1 or 2 juniors, so it’s hard. We try to tell them to let the kids play in front of their school mates and have fun. We want them to play and have a blast with their friends, to be a big man on campus and the social aspect as well. Kids get props for playing in front of family and their school fans.”

All area high school hockey teams are seeing major changes in ice time with the closure of the Polar Palace in Lapeer this past April. Guzak isn’t so much affected by that because Flushing has always skated out of Iceland Arenas. But, Iceland is down to one sheet of ice and Flint Powers left Crystal Fieldhouse when all the teams that used to skate out of Lapeer had to switch to Crystal Fieldhouse.

“Powers is back to Iceland and we stayed and that’s put a twist on things,” said Guzak. “They now have the traditional right-after-school practice time and our kids are practicing from 5:30-7 p.m. That’s going to be tough on families with homework and other school/family commitments.

Guzak also understands the importance of high school hockey. He’s been playing since 1972. A Swartz Creek resident, he went to Flint Powers for four years. “I understand the hyper local link and wanting to play for your high school.”

With all the changes in teams and new co-ops, the schedules will also look much different. Guzak says Flushing will still play the Tri-Valley Titans which is a lot of the Saginaw schools, Swan Valley, Midland, teams from the Saginaw Valley League. “Everyone is in the same boat for scheduling,” Guzak said. “We’ll see more road games for nonconference and likely will play the new team in the Thumb Area.”

That’s the Eastern Thumb Area Legion that formed last season. Kids on that co-op are from Deckerville, Croswell-Lexington, Elkton-Pigeon- Bay Port, Marlette, Sandusky and Ubly. Guzak also noted that so far he has 19 or 20 games in the book, but schools are allowed 25. Some of the Div. 1 schools that are still standalone such as Davison and Grand Blanc are not interested in taking on the co-ops. That, said Guzak, makes him miss the days of the Big Nine. Local teams playing one another.

Once regionals come around, Guzak said it should be similar with Swan Valley and powerhouse Saginaw Heritage. “They are super deadly because they pull from the Jr. Saginaw Spirit players,” said Guzak.

The season is going to be a big change for all the hockey programs. As far as his kids this season, Guzak has specific goals in mind for them.

“I want the kids to learn how to work hard, develop friendships, have fun and learn how to be a good brother, a good locker room guy and pick up the lessons that high school sports are supposed to teach: build character and integrity, sportsmanship, leadership.”

After coaching for 30 seasons, Guzak said he still loves and enjoys the game. He hopes his players take that to heart and that the middle school kids can look up to his kids and someday want to skate for their high schools, too.