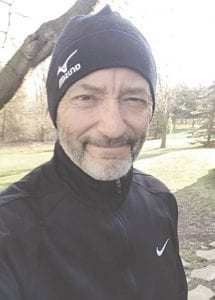 FLUSHING TWP. — When the Boston Marathon was pushed back to September because of COVID-19, it took a little bit of the wind out of David Smith’s sails.

Smith was more determined than disappointed, however.

The Flushing Township runner and marathon qualifier will still run at 10 a.m. Monday, April 20, but he’ll do it closer to home, and he’ll do it for a cause.

“I had been training for the Boston Marathon, so when they canceled it, it was very disappointing,” said Smith. “But I had a lot of time and energy put into it. So, rather than waste the time and training, I decided to do it on my own. As soon as I made that choice, I realized it was exactly what I needed to do. It was something to look forward to. So, I kept running.”

Smith mapped out a route of about 26.2 miles that will take him from his home to New Lothrop and Juddville, then back home.

“It’s not a sanctioned, certified race,” he said. “I’m just doing it for my own purposes.”

Then other people decided to join in. Some are running part of the route, others are walking.

“What went along with that, as far as making it more significant for me, was that I got weary of listening to people remarking on the phrase ‘social distancing’ as a burden,” Smith said. “I decided to make it something powerful, something good for a local organization.”

“I’m a big fan of Carriage Town,” he said. “In the last several years, they’ve made an amazing change in the City of Flint as far as helping folks who are on the street … transition into a place where they can create their own success plan and work toward getting reliable income and, hopefully, a place of their own to live.”

Donations can be made at “Social Distance for Carriage Town” on gofundme at www.gofundme.com/f/social-distance-for-carriage-town?utm_source=customer&utm_medium=copy_link&utm_campaign=p_cf+shareflow-1.

Smith has been running marathons since 1988. In September, he will run his 7th Boston Marathon.

He discovered a passion for running by chance.

“The purpose, originally, was that it was a social thing,” Smith said. “It was good to be around people. But it’s also a very solitary thing. I do some of my best thinking when I’m running, but I also enjoy some of the best company.

“It’s certainly not a sport for everybody. But, for me, it’s an expression of something I was made for. I enjoy it. It’s me at my best. I’m almost 63 years old now, and I still have the ability to get out and run 26 miles. I feel like that’s because of one of the gifts I was given.”

Anyone who wants to cheer him on can find him along the 26.4- mile route that will take him west on Potter Road, north on Dillon Road, west on West Carpenter Road with a slight southward jog on Sheridan to Riley Road where he will continue west then head north on North New Lothrop Road. He will go through a portion of the Village of New Lothrop then continue west on Easton Road, south on Reed Road, east on East Juddville Road with a slight northward jog on Sheridan Road to Pierson Road, south on Seymour Road and back to Potter Road then home.