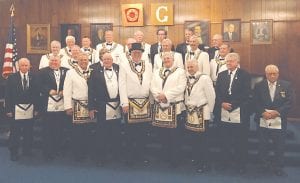 FLUSHING — Flushing Lodge #223, Free and Accepted Masons celebrated 150 years of Masonry and service to the Flushing area at a rededication ceremony on July 20.

Michigan Grand Lodge Officers from all around the state gathered to rededicate and honor the Flushing Masonic Lodge on 349 S. Seymour Road, which was built and dedicated in 1970.

The evening began with a buffet dinner and about 20 minutes of entertainment. Before guests retired to the Lodge Room, membership awards were presented to Lodge members William Vaughan for 25 years, Dennis Sanborn for 25 years and John West for 70 years.

The awards were presented by Most Worshipful Grand Master David M. Hill and the officers of the Michigan Grand Lodge, Free and Accepted Masons of Michigan.

Upstairs in the Lodge Room, a solemn ceremony of rededication was conducted by the Michigan Grand Lodge Officers. However, there were plenty of smiles and positive comments regarding the Flushing Lodge and the Flushing community.

The Flushing Masonic Lodge is proud to report that the night was a great success and presented a pleasant time for all in attendance, complemented by a scrumptious dinner and well-received honors.

Below is a mission statement from the Flushing Lodge:

Being a Freemason, or Mason is a title we hold when we join the Fraternity which is the oldest in the world and has members in over 100 countries. It teaches us to be true and loyal to the laws of the country in which we reside. It teaches many other things to build character, become upright citizens and help others.

We are a charitable organization and contain members from different countries, races, sects and religious beliefs. Masons in this area formed a Lodge and received the Charter on Jan. 10, 1868 before Flushing became an Incorporated Village in 1877. Since then, we have strived to be a good influence in the community and to practice charity.