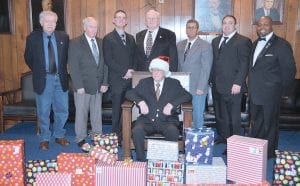 FLUSHING TWP. — Christmas came early for two area families this year, thanks to the generosity of members of the Flushing Masonic Lodge.

Last week, Flushing Masons from Chapter #223 distributed presents to a pair of special needs students who attend the Elmer A. Knopf Learning Center in Flint. Gifts for the kids and their families included clothing, household items and a video game system with games for one of the students.

Flushing Mason Derrick Gillard, who holds the position of Junior Warden at the Flushing Masonic Lodge, oversaw purchasing and wrapping gifts. He said that the Elmer A. Knopf Learning Center worked closely with the Masons to select students and their families who demonstrated the greatest need.

“Sadly, there are a number of unfortunate families in our community,” Gillard said. “Knowing that we are really making a difference in their lives is so important.”

Gillard, who is also a substitute teacher at the Elmer A. Knopf Learning Center, said that the school primarily serves older children with developmental/cognitive issues and mental impairments. As such, the Masons’ gift-giving initiative focused less on toys and more on basic living items for the families being served.

“It was such a pleasure to know that we’re satisfying the needs of these families,” Gillard said. “The opportunity to do something for humanity in a way that is self-sacrificing but empowers others…is really the main goal of our Lodge.”

The Flushing Masons were also aided in their gift-giving efforts by the Michigan Masonic Charitable Foundation.

“The Michigan Masonic Charitable Foundation helps individual lodges by giving us extra money toward our endeavors to help out the local communities,” said Wally Usery, Worshipful Master of the Flushing Masonic Lodge. “Once we submit our projects to the foundation board and they get approved, we can get matching funds up to a certain amount.”

For over 150 years, the Flushing Masonic Chapter #223 has striven to be a good influence in the community and to contribute to a wide range of charitable causes. In each of the last two holiday seasons, the Flushing Masons have set aside funds to donate Christmas gifts to area families in need.

In 2018, the Lodge worked with Flushing Community Schools to distribute presents, gift cards and winter clothing to two families in the district.

The chapter also hosts a Child ID program during the Flushing Summer Festival and frequently donates to other charitable organizations in the community.