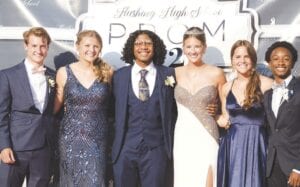 FLUSHING — In a year of setbacks and cancellations, members of Flushing’s Class of 2021 still got to realize their prom night dreams.

FHS seniors Ian Barbour and Keeli Lindstrom were also crowned Prom King and Prom Queen. After the crowning ceremony, fireworks lit up the night sky as a final sendoff for the promgoers.

The Planned Prom event came about after Flushing High School canceled its official 2021 Prom due to COVID-19 restrictions. But a group of six mothers (The Prom Moms) stepped in to plan an alternate prom for the senior class and worked together to arrange the event over a six-week period. 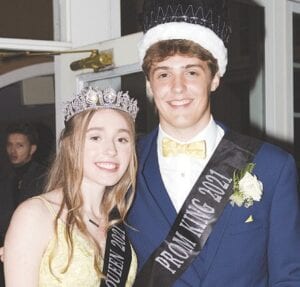 “We felt that the seniors had missed out on so many important events of their junior and senior years, that we really wanted to make prom happen and make it special,” said Breanna McNamara, head organizer for the parent-planned prom. “Many thanks to all who made this event possible, especially the Prom Moms. These women worked for weeks planning, crafting, fundraising and coordinating. This event would never have been possible without those ladies.”

Originally, organizers had planned to hold the prom outdoors because of COVID restrictions. But the event was moved indoors at the golf club’s banquet center after restaurant restrictions were lifted on June 1.

Tickets for the prom were sold to 194 attendees, and several volunteers showed up to help prepare for the big night.