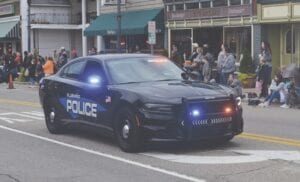 The City of Flushing reached a new contract with its police department on Sept. 14 File photo

FLUSHING — Following 29 months of negotiations, the City of Flushing has reached a contract agreement with its police department.

On Sept. 14, Flushing City Council settled a new contract with the Police Officers Labor Council, which represented the Flushing City Police Department. City council members approved the contract by a 6-0 vote, with Councilwoman Brooke Good abstaining from the vote because her husband is a Flushing police officer.

Flushing Police Chief Mark Hoornstra said having a settled contract will make it much easier for his department to attract qualified candidates to fill open positions. For the past three years, the Flushing City Police Department has been unable to fill a vacancy that was created when one of its officers retired—even though the position was funded in the city budget since the 2017/2018 fiscal year.

“One of the reasons we have not been able to fill this position is because the benefits for new employees has been part of this negotiations process,” Hoornstra said. “This vacancy has put a great deal of strain on the existing staff by having them work long hours and (it) has also had an impact on the budget by having to pay overtime. I believe the settlement will pave the way to fill this vacancy.”

Hoornstra also said that the new contract will be a morale boost for his current officers and future recruits who join the department.

“A large percent of the officers will be eligible to retire in the next few years,” he said. “Having the ability to hire someone now and giving them a chance to work with the experienced staff will help the next generation of officers as the current group departs.”

Contract negotiations between the city and the police union began in April 2018 and resumed for the next two years. Although the Flushing City Police Department’s prior contract with the city expired on June 30, 2018, Flushing police continued to operate under terms of the old contract until the new agreement was reached.