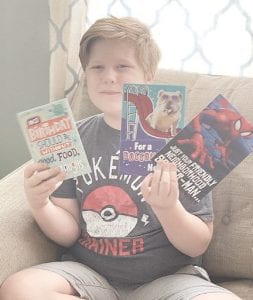 FORT HOOD, TX — Kara Goodrich is thanking the Flushing community for sending a bounty of birthday greetings to her son over the past few weeks.

Goodrich, a former Flushing resident who now resides in Texas, posted a special request on social media to ask Flushing locals if they would be interested in sending birthday cards to her son Shelden, who turns age 10 on June 3.

In response, many residents stepped up and sent birthday cards to Shelden. The nine-year-old and his family have already received 53 cards and counting, many of which have included encouraging personal messages from senders in Flushing and other Michigan communities. 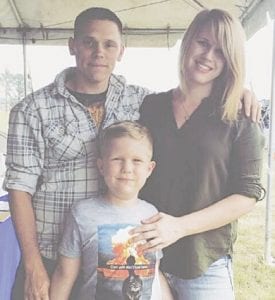 Shelden with his parents Kara and Michael

“I started getting ‘mom’ emotions, wondering what I could do to help Shelden feel special on his birthday,” she said. “That’s when I thought to make the post on social media, see if maybe a few people would take interest and send him a card.”

Goodrich said she didn’t expect much of a response from her post but was pleasantly surprised when dozens of Flushing residents commented on her request and offered to send cards to her son.

“I love how my hometown has always pulled together during hard times,” she said. “These cards mean so much to Shelden and have made him feel very special.”

Goodrich’s husband Michael, who is active duty in the United States Army, is stationed at Fort Hood in Texas. Because the Department of Defense (DOD) has implemented more aggressive measures for mitigating the coronavirus, the Goodrichs have had to follow strict stay-at-home guidelines while living on the military base.

For Shelden, receiving the birthday cards has made it easier for him to cope with all the changes brought on by the pandemic.

“The cards help me feel special for my birthday,” he said. “It really helps for what we are all having to do.”

Goodrich said that she is going to make a memory box for Shelden’s birthday cards, giving him a special way to remember his 10th birthday and the people who generously reached out to him.

Flushing residents who are interested in giving a birthday card to Shelden can send it to this address: 84356 Native Pecan, Unit 1. Fort Hood, Texas, 76544.