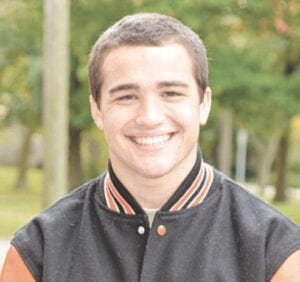 FLUSHING — Flushing High School senior Cabhan Suttles has been named the Rotary Club of Flushing’s Student of the Month for May.

Suttles, who is a dual-enrolled student and member of the JR ROTC program at the Genesee Career Institute (GCI), competed for three years on the Flushing Varsity wrestling team and was a two-time captain.

As a senior, Suttles advanced to the MHSAA Wrestling State Finals, where he placed sixth in the 215- pound weight class and earned All- State honors. He was also MVP of the Flushing Varsity wrestling team.

In addition to wrestling, Suttles played varsity football for FHS this past season and earned the team award for “Most Improved Player.” He also earned a Flint Metro League Honorable Mention as a defensive lineman.

After graduation, Suttles said he is interested in possibly joining the National Guard and exploring an apprenticeship in bricklaying. He has also not ruled out attending Mott Community College for a few years.

Suttles also wants to travel the world and especially visit Ireland and Germany. He said he would like to take his Mom there sometime to repay her for all she has done for him and his brothers.

Suttles’ favorite instructor at Flushing Community Schools was Matt Daniel, who was Suttles’ fifth grade teacher at Elms Elementary School before becoming the Assistant Principal and Athletic Director at Flushing Middle School. Suttles appreciated Daniel’s sense of humor and willingness to help in any way.

Outside FHS, Suttles volunteers at the Ligon Center with the JR ROTC program through GCI. He currently works at Hungry Howie’s in Flushing and has worked at Runyan Tree Farm for the past two years— mowing, pulling weeds, watering trees and helping pour cement for a new barn.

Cabhan’s parents are Wayne and Shantel Suttles. He also has two brothers: Wyatt, a 2019 FHS Graduate and Rogan, an eighth grader at Flushing Middle School.

Suttles has designated his $100 Rotary donation for the Wounded Warrior Project.