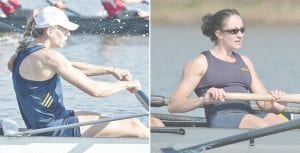 Tomek, who now calls Princeton, New Jersey home, placed fifth in the doubles sculls in the 2008 Olympics. She began her rowing career at the University of Michigan in 2002 and earned her economics degree from U-M in 2006. She’s coached by Sarah Trowbridge and is affiliated with two clubs – the USRowing Training Center in Oklahoma City and the New York Athletic Club. Tomek was a member of the US senior teams from 2007- 2009 and 2013-2016. She was also part of the Under 23 Team in 2006 and placed fourth that year at the World Rowing Under 23 Championship. In 2007, Tomek placed sixth in the women’s quad sculls at the World Rowing Championship.

Andrew Evans, born and raised in Portage, earned a spot on Team USA in the discus after achieving the Olympic standard with a new personal best and third place in the U.S. Olympic trials in track and field in Eugene, Ore.

Alisha Glass, born and raised in Leland was named an alternate in volleyball for Team USA in the 2012 London games. She’ll play at setter in Rio.

Connor Jaeger, U-M alum, U-M alum, specializes in men’s swimming freestyle events and took sixth place in the 1500 freestyle in the 2012 Olympics. He earned a spot in Rio after winning the 400 freestyle at the U.S. Olympic trials.

Grace Latz, born and raised in Jackson, made her first Olympics this year and will compete in quad sculls in rowing.

Desiree Linden, of Rochester Hills will run for Team USA in the women’s marathon.

Ann Marsh-Senic of Royal Oak is a three-Olympian in fencing. She’s an emergency room physician in Pontiac. She previously competed in the 1992, 1996 and 2000 Olympic Games and will return as the captain of the women’s foil team this year.

Sam Mikulak, U-M alum and member of the men’s gymnastics team. Was unable to compete in five of the six events in the 2012 Olympics because of an ankle injury. He posted the highest all-around score at the U.S. Olympic trials in St. Louis this year.

Emily Regan, U-M alum, will compete in the women’s eights in rowing. She’s part of the U.S. team competing for its third straight gold in the eights.

Serena and Venus Williams, born in Saginaw. Serena, a four-time gold medalist will look to defend her title in singles and doubles, where she partners with sister, Venus. Serena is ranked number one in the world in singles by the Women’s Tennis Association.