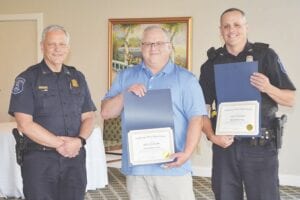 FLUSHING — The City of Flushing showed appreciation for its police force Monday night by hosting an awards ceremony and banquet for officers and their families.

The ceremony, hosted by Flushing City Council and held at the Flushing Valley Golf & Country Club, highlighted individual acts of bravery and professionalism performed by Flushing police officers in the line of duty. Officers were honored with certificates and commemorative ribbons.

“Tonight is about our police officers…we cannot say enough how much you mean to this city,” said Flushing Mayor Joseph Karlichek. “You are the unsung heroes, and you choose to run heroically toward danger and evil. This community admires every single one of you.”

As part of the night’s festivities, Flushing City Police Chief Mark Hoornstra bestowed unit citations to several of his officers, including Sgt. Steve Colosky, Officer Eric Earns, Officer Robert Forlenza, Officer Michael Good, Officer Matthew Jensen, Officer William Wilkins and Officer Scott Matzke. A unit citation is awarded to a group of two or more officers who, in the line of duty, perform an outstanding service to the department and the community. 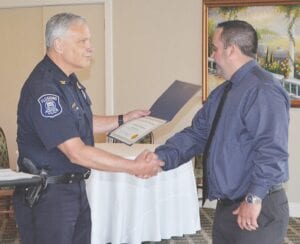 Each of the officers were honored for apprehending dangerous suspects during investigations and/or traffic stops. For example, officers Jensen and Good were recognized for their role in locating and arresting a home invasion suspect in the city on Sept. 13, 2020.

Colosky, who is the Flushing City Police Department’s lead detective, also received an Excellence Award for gathering essential forensic evidence that led to the arrest of an arson/attempted homicide suspect on June 6, 2020.

Life-Saving awards were presented to officers Scott Matzke, William Wilkins and Eric Kerns (who is also a part-time officer with Flushing Township). Matzke and Wilkins received the honor for coming to the aid of an unresponsive driver at an intersection on E. Pierson Road on Jan. 18, 2020 and performing CPR until paramedics arrived.

Wilkins, along with Officer Kerns, also received a Life-Saving Award for preventing a suicide attempt on April 6, 2020 and providing medical assistance for the subject until EMS could arrive.

Officer Eric Earns, Officer Lenny Jaskulka and Officer William Tucker each received Meritorious Service Awards for showing courage in the line of duty. Earns and Jaskulka were recognized for using crisis management skills to convince a suicidal subject to surrender a loaded gun, while Tucker was honored for rescuing an elderly homeowner from a house fire on Feb. 7, 2021.