FLUSHING — Fourth grader Oliver Sopczynski and his classmates are saluting military veterans with a special tribute that they created for a class project.

Sopczynski, a student at Springview Elementary School, came up with the idea to transform an ordinary wall outside his classroom into a “Wall of Honor” for Veteran’s Day. Students who participated in the project honored members of their family who’ve served in the military—including parents, grandparents, aunts and uncles and siblings.

The Wall of Honor itself is comprised of sheets of paper that display a veteran’s name, branch of service and era of service (which war or period they served in), along with a student’s relationship to the veteran. Many students have also included photos of their veteran family members to be placed on the wall.

Kids at the Early Childhood Center— where Oliver’s younger sister attends— have also put up a smaller veteran’s tribute wall. 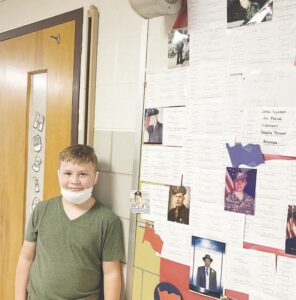 Oliver Sopcyznski with the Wall of Honor at Springview Elementary.

Sopcyznski, 10, was inspired to create the Wall of Honor after seeing formats for bricks that have been used in veteran’s memorials. After pitching his idea to principals at Springview and the ECC, he encouraged his classmates to get background information on family members who’ve served in the military and fill out the “paper bricks” for the wall.

The Wall of Honor at Springview, however, isn’t Sopczynski’s first patriotic project. For Memorial Day, he raised $500 to put 500 American flags on the graves of soldiers and veterans at the Sunset Hills Cemetery on River Road in Flint Township.

Kim Key, Sopczynski’s teacher at Springview, said that she’s proud to see him giving back to veterans and getting his classmates involved in the project.

“The kids are excited to point out who their veteran family members are, and parents are happy to help out with filling in information,” she said. “It’s an honor to have a student (like Oliver) who’s so into the military and wants to do good in remembrance of our veterans.”

Oliver is the son of Jacob and Ashley Sopcyznski of Flushing.