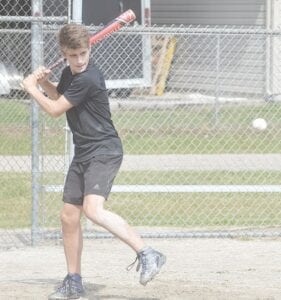 Flushing Pick-up Baseball will be held every Monday and Wednesday at the baseball field near Central Elementary. Photo by Ben Gagnon

FLUSHING — Kids looking for a good game of baseball can drop in for some entertaining pick-up action in Flushing all summer long.

The Flushing Pick-Up Baseball League, one of Flushing’s longest running baseball programs, will be holding games on the baseball field behind Central Elementary School every Monday and Wednesday morning from 10 a.m. to noon. No registration is required for kids to participate, and balls, bats and bases are provided every game.

Dale Harris, owner of Skip’s Comeback Inn in Flushing, has been hosting the league for 18 consecutive years. He said that his mission is to provide area kids with a relaxed environment to play in, while teaching them the fundamentals of baseball.

Drawing between 30 to 40 youth each week, the league is open to a wide range of young athletes— from early elementary school kids to middle schoolers and even high schoolers. All skill levels are represented as well, from T-ball beginners to experienced travel ball players who’ve been in the league since their elementary years.

Each season, the league also attracts a colorful cast of characters identified by nicknames like “Hey You,” “It’s My Fault,” “Jellohead” and “Godzilla.” Sixteen-year-old Peyton Orr, christened as “Sir Stinky of Flushing,” got his nickname because he wore the same baseball shirt to the pick-up games in his first year.

“This is a best place to grow as a player,” said Orr, a veteran of the pick-up league since he was 11-years -old. “There’s so much comradery and it keeps me coming back every year.”

Orr, who now plays baseball for Flushing High School and with a travel league, even has his own autographed “Sir Stinky” shirt displayed at Skip’s Comeback Inn.

Austin Bruff, who’s played in the league since he was seven-years-old, earned the nickname “Nanny- Nanny Boo-Boo” for the way he antagonized Harris when he got on base as a young kid.

“I would lead off at third base, look straight at Dale (who was pitching) and holler ‘nanny-nanny boo-boo, you can’t get me,’ and try to get him to pick me off,” Bruff said. “One time I didn’t wear shoes, so I was ‘Hillbilly Boo-Boo’ for the day.”

Bruff, now 24, said he loves coming back in the summer to play with the new generation of sluggers on the sandlot and give pointers whenever he can.

“It’s great to help out the kids who might not get a chance in other leagues and teach them the basics,” he said. “They can come out, learn the game and maybe even make it at the next level.”

One of the league’s bright young players is nine-year-old Bodie Schlemmer, AKA “Big Money.” Schlemmer, who also plays travel baseball, learned the game two years ago as a “newbie” in the pick-up games. Although he started out a little shy, “Big Money” has now grown into the one of league’s most outspoken personalities and is a regular each week on the diamond.

“I really get to clear my thoughts out here and just let loose,” he said. “It’s the most fun ever.”

The Flushing Pick-Up Baseball League will run throughout the summer until August. Kids will get to enjoy Hot Dog Day on July 5 and Ice Cream Day at the end of the season on Aug. 4.