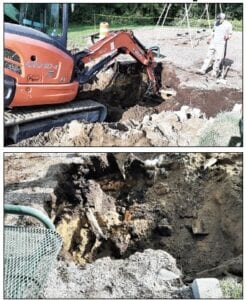 Norm Goddard, the township’s maintenance supervisor, was mowing near the nature park playground on Sept. 14 when the ground suddenly caved in around him and nearly swallowed his lawnmower. Goddard used a large tractor to pull his mower out of the hole, then contacted Flushing Township Supervisor Fred Thorsby to come out and survey the damage area.

Thorsby said that the sinkhole, which was about five feet deep and 15 feet wide, appeared after a water pipe underneath the playground burst and eroded the soil above. The playground area was immediately sealed off, and a call was placed to a local contractor to come and fill in the hole.