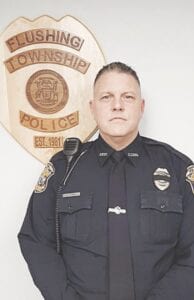 TROY — A Flushing Township Police Officer was among six officers honored with 2020 Outstanding Service Awards (OSA) by the Police Officers Labor Council (POLC) during an awards ceremony. The OSA recipients, including three Battle Creek officers, a Mount Morris officer and a Wayne State University officer, were nominated by fellow POLC Officers for their heroic efforts.

“The POLC is extremely proud to represent these brave officers,” said POLC Director Rob Figurski. “Their quick response to potentially deadly situations is a testament to their extraordinary courage and commitment to protecting and serving.”

Flushing Township Police Officer Brian Farlin was recognized for rescuing a 17-year-old girl trapped inside her burning home on Oct. 19, 2019.

The Flushing City officers lifted Officer Farlin and the fire chief to the home’s first story roof, where they had access to the second level. Chief Michaels broke a second story bedroom window and Officer Farlin pulled the victim out of the smoke-filled room safely through the broken glass.

“I ripped the curtains down and draped the curtains over the window,” said Farlin, who sustained lacerations and abrasions to his hands and arms. “We physically lifted her up and brought her out horizontally. She didn’t get cut. The chief had protective gear on and obviously I didn’t.”

Farlin and Michaels lowered the victim down to city officers, who rushed her to a waiting ambulance.

“We looked over the edge of the roof and everyone was gone,” Farlin said, laughing. “So, we just climbed down the antenna. It was no big deal.”

The victim, who was home alone, was treated and released from the hospital for smoke inhalation. The fire was caused by one of the children leaving something burning on the stove.

“She was in the bathroom giving the dog a bath and smoke came up through the vents,” Farlin said. “She called her dad and her brother called 911.”

Flushing firefighters rescued the dog, who was hiding underneath a bed, Farlin said.

“On Oct. 21, Chief Michaels came into my office and informed me of what had occurred,” said Flushing Township Police Chief Mark Bolin during the award presentation. “I asked him what would have happened had they not responded in such a timely fashion and he said the results would likely have been fatal.”

Visit polc.org/category/os-awards/ for more information on the POLC and its Outstanding Service Awards. — B.G.