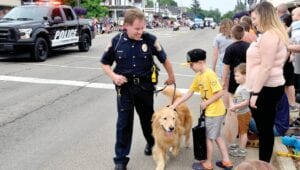 Sgt. Jim Hough and his K-9 Colt interacting with spectators at a Flushing parade. File photo

FLUSHING TWP. — Longtime Flushing Township Police Officer Jim Hough has been promoted to the rank of sergeant by his department.

Hough, who joined the Flushing Township Police Department in 2003, received his promotion earlier this month and will be working a split shift in the township. As sergeant, he will be taking on a supervisory role and mentoring new officers who join the force.

Flushing Township Police Chief Mark Bolin described Hough as the “first one to work and the last one to leave,” saying that Hough’s compassion, hard work and humble personality made him a great fit for the rank of sergeant. Hough has served as the resource officer at Flushing High School for many years. He will be replaced at the high school by newly appointed Flushing High School Resource Officer Roy Hatchett, who has been the Flushing Middle School resource officer since 2017.

In addition to his duties as the Flushing High School resource officer, Hough has become well-known in the community for his trusty K-9 partner Colt, a golden retriever who has served alongside him since 2016. Hough and Colt have been a popular fixture at local parades and Flushing Community Schools events. Hough has also been recognized for his service to the community by the Flushing Area Chamber of Commerce and was named the 2018 Township Employee of the Year.