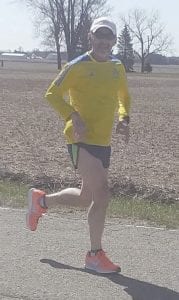 David Smith of Flushing Township planned to run the Boston Marathon on Monday. Instead, he ran a 26.4-mile route closer to home and raised money for a cause. Photo by Lania Rocha

FLUSHING TWP. — On Monday, David Smith was supposed to run through the streets of Boston, past Fenway Park, up the notorious Heartbreak Hill, and cross the finish at the historic Copley Square.

It would have been the Flushing Township runner’s seventh Boston Marathon.

The world’s oldest marathon, however, was postponed until September to help slow the spread of the COVID-19 virus. So, Smith took to the roads of Genesee and Shiawassee counties for his own marathon, and to raise awareness of and funds for Flint’s Carriage Town Ministries.

Smith, who plans to run the 26.2-mile Boston Marathon in September, finished his own 26.4-mile route in 3 hours, 36 minutes.

“There were a dozen people out on the course cheering for me and handing out water,” Smith said. “They had homemade signs and little icons from the Boston Marathon. A few people jumped in and ran with me.

“One woman was Leslie Sedlarik, and then there was Chris Triplett, who ran more than four miles, and Terry Bate, who ran the last two with me. My friend Jerry Knoodle ran 13.1 miles.”

Friends, family and neighbors created a finish line for Smith to cross, and his wife put a medal around his neck.

As of Monday morning, the gofundme account was up to $4,700, and George Skaff planned to send $500 directly to Carriage Town, Smith said.