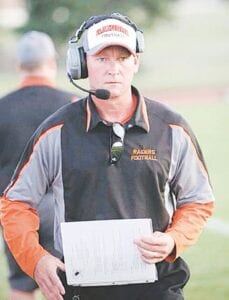 FLUSHING — After nine seasons at the helm of the Flushing Varsity football program, Head Coach Robert Oginsky is hanging up the headset.

Oginsky, affectionally known as “Coach O” to players and colleagues, has announced that he will be retiring from the Raiders football program this year. Although he’s stepping away from athletics, Oginsky will continue teaching his eighth-grade math students at Flushing Middle School.

Under Oginsky, Flushing captured two district titles (2014 and 2017), a Flint Metro League title in 2018 (shared with Ortonville- Brandon) and four straight playoff appearances (2017-2020). In 2017, the Raiders made it all the way to the Regional Final before falling in a thriller to Livonia Franklin.

Flushing High School Athletic Director Adam Smith described Oginsky as a hard worker who took the football program to new heights and valued the connections he built with his players.

“He was a coach that never got too high and never got too low, always composed and ready to lead the athletes into battle on the football field,” Smith said. “More important than any victory, Coach would tell you that he is going to miss the close relationships he’s built over the years. I don’t know how many times I’ve talked to Coach over a weekend and he was out helping a former player with fixing a vehicle, obtaining a job, transporting to work, or just being an ear to listen to them in times of need.”

For his part, Oginsky said that the opportunity to mentor young athletes is what he’s loved most about coaching on the gridiron.

“I had many special moments, like being able to coach my son when he was on the team and making the playoff runs,” he said. “But most of all, I’ll miss the life lessons that football teaches and relating those lessons to the players.”

Shortly after Oginsky was hired by Flushing Community Schools as a teacher in the 1997/1998 school year, his athletic past caught the attention of then Flushing head football coach Bob Buckel. Buckel, who had previously been the head varsity football coach at Birch Run, remembered Oginsky from his footballplaying days at Mt. Morris.

“Coach Buckel recalled my name when I hired in and asked if I was interested in coaching baseball at the lower levels in Flushing,” Oginsky said. “As a brand new wet-behind-ears teacher, I didn’t think I was ready to start a new career and coach at the same time. But I got my feet wet with coaching that first semester, and the rest is history.”

During the 2000s, Oginsky would go on to coach football and baseball at the freshman and junior varsity levels before settling in as an assistant on the Flushing Varsity football team in 2008.

As he enters a new phase of his career, Oginsky said that he plans to spend more time with his family and watch more of his daughter’s volleyball and track competitions at Flushing High School.