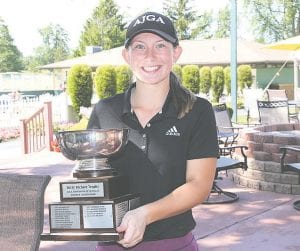 ST. CLAIR – Kerrigan Parks of Flushing admitted she had thoughts about winning the 26th GAM Women’s Championship presented by the LPGA Volvik Championship on her 18th birthday.

“I did,” she said. “I was thinking how awesome it would be to win it on my birthday, and it is.”

Parks, headed in a few weeks to Marshall University in West Virginia, shot a 1-under 35 on the back nine to power a 75 for a 150 total and a happy birthday two-shot win over Katelyn Chipman of Canton Tuesday at St. Clair Golf Club.

“It is really an awesome feeling,” said this year’s winner of the Michigan Girls Junior State Amateur and stroke play qualifying medalist at the recent Michigan Women’s Amateur Championship.

“I’ve won a couple of GAM events this year and it has really given me confidence. I know I just need to keep working hard before I go to Marshall and then hopefully I can do well there, too.”

Parks said she finished the front nine with consecutive double bogeys on Nos. 8 and 9 and was not feeling good about her chances to win.

“I had the two-doubles, and a fourputt, so that was tough,” she said.

She quickly birdied No. 10 with a wedge to 6-feet from the rough, however, and then birdied the par 3 No. 12 hole with an 8-iron shot to six feet.

“Then I doubled 13, but birdied 14 and played solid on the way in. A 75 with three doubles is not the way I planned it, but I kicked it into gear on the back nine and played more like myself. The birdie at 10 was probably the real changer. The birdie gave me a fresh start.”

Parks was unsure of where she stood in the 36-hole tournament. She just knew she was ahead of Chipman and Dy in the final group.

“I saw Sarah White in front of us making a lot of putts, so I thought she might be doing really well,” she said. “I was just glad to play a lot better on the back nine. I was surprised when I was told I had won.”

Parks, who won the Betty Richart Trophy, plans to play one more tournament this summer before heading to Marshall on Aug. 15.

“It has been a great summer,” she said. “I’m looking forward to college and golf. I want to go to pharmacy school, that’s the plan.”

Her father Russ, who was in attendance, said his daughter has been a killer on the back nine all summer.

“If you add them all up she would be under par on the back nine for the entire summer,” he said. “I’m really happy for her.”