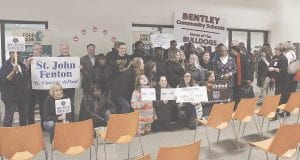 A group of partnering organizations and food distribution sites gathered after the news conference. Photos by Paula K. Schmidt

FLINT — The Food Bank of Eastern Michigan (FBEM) kicked off its holiday giving season with CEO Kara Ross stating their goal for this event is $725,000 and welcomed and introduced several of their corporate and local partners who help them feed thousands of families in 22 counties throughout the year.

Ross said one in four families can’t even begin to think of having family get togethers as is typical for this time of year because they are struggling just to feed their own family. She added the money raised during this time of year provides for FBEM’s needs well into January.

She described how they, with about 400 partners, meet the goal of keeping families fed, which they do with very little paid staff as well as hundreds of volunteers.

One of those partners, Kroger, allows customers to round up their purchases to the next dollar amount or purchase a paper ornament which signifies a donation of $1, $5, or $10. Spokesperson Rachel Hurst said Kroger donated 5.3 million pounds of food last year to six local partner food banks as well. 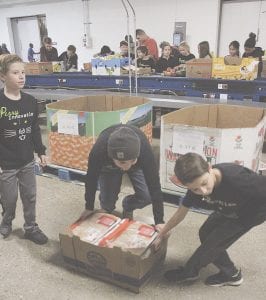 Some helpful kids from Perry Innovation Center in Grand Blanc were on hand for some of the heavy lifting (and dragging).

One hundred percent of the ornament sales goes to their food bank program. Hurst said Kroger has a program called “Zero Hunger, Zero Waste’ in which their goal is to end hunger in their communities by 2025 and to eliminate waste in their stores by 2020.

In addition, Ross encouraged local businesses to contact them because there are many ways to get involved and make a difference besides what Kroger does or working in the ‘Hunger Solutions Center’ packaging boxes to feed others.

Some of the other partners who help out and were introduced at the event included Security Credit Union, Flint Firebirds, and Qualified Staffing who Ross said was new to the partnership and was celebrating their 30-year anniversary and would be donating 30,000 meals to FBEM to mark the occasion.

The Firebirds Fight Hunger campaign gives free tickets for food donations throughout January and also support the backpack food program. Dominic Hennig, Director of Broadcasting & Communications for the Firebirds said last year the donated over 15,000 pounds of food to the FBEM through their program.

Ross further thanked other partners who helped them with in-kind donations of marketing and media relations, including M-Live, State Banke, VG’s—Spartan Nash, local colleges and other businesses and organizations who raise thousands of dollars for the campaign.