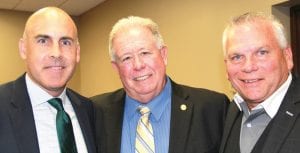 The Food Bank of Eastern Michigan hosted a press conference on Friday, June 24, which featured the President of Feeding America Matt Knott (left), the President of the Food Bank of Eastern Michigan Bill Kerr (center), and the Executive Director of the Food Bank Council of Michigan Phil Knight (right). The men addressed the roles and remarkable collaboration of their organizations in response to the Flint Water Crisis, as well as their continued efforts in providing aid to the community.

Editor’s Note: View Newspaper Group and Genisys Credit Union are proud to partner with the Food Bank of Eastern Michigan in their HUNGER ACTION MONTH fundraising drive by placing donation envelopes in our papers Sept. 8. The following is the first of three articles that will provide information about the Food Bank and how even small donations can make a big difference. Please consider donating to this deserving cause.

FLINT — September is Hunger Action Month, an initiative aimed at combatting hunger across the nation. Advocates from around the U.S. work throughout the month of September, shedding light on our hunger crisis and gathering donations in order to feed the men, women and children affected by hunger. The Food Bank of Eastern Michigan is one of these advocates. The organization, however, works year-round, donating their time, energy and resources to feed the hungry.

Established 35 years ago as a grassroots community organization in Genesee County, The Food Bank of Eastern Michigan now serves as a common solicitor, storehouse and distributor of food to non-profit and charitable organizations in 22 counties in east Michigan, from Genesee County to the Mackinac Bridge. FBEM works with 415 partner agencies, comprised of churches, food pantries, shelters and kitchens, in order to distribute food to families and individuals throughout eastern Michigan.

Kelly Belcher, the marketing and communications manager for FBEM, says that the organization also heads a number of programs in order to better serve eastern Michigan. Some of these programs include their BackPack Program, School Pantry Program and Senior Grocery Box Program. Most of the Food Bank’s initiatives attempt to reduce hunger, educate families on proper nutrition, and/or promote healthy lifestyles.

In order to accomplish these monumental tasks and provide food to families in need, FBEM relies heavily on volunteer efforts. A critical component of their noble cause, volunteerism provides the organization with the manpower necessitated by such an undertaking.

Said Belcher, “Last year, we hosted more than 8,500 volunteers, and they put in more than 65,000 hours. That’s just here at our facility. We would not be nearly as efficient if it weren’t for our volunteers. If we had to pay people to do all that work, it would cost a lot, to cover those 65,000 hours. Because of our volunteers, we’re able to save 98 percent of our contributions and put them directly into programs that support our mission. We keep our administrative costs at 2 percent, which is part of the reason we have a fourstar Charity Navigator rating, and we’re really proud of that.”

In order to continue serving the men, women and children of eastern Michigan, the Food Bank hosts and participates in a number of great events throughout the year that bring the community together in support of the fight against hunger. Thanks to a partnership between Genisys Credit Union and View Newspaper Group, the Food Bank will raffle off a “Wheelbarrow of Cheer” filled with craft beer at the 4th annual View Brew Fest set for 3 to 10 p.m. Saturday, Sept. 17 at Louie’s Sports Tavern in Lapeer. Tickets for the raffle cost just $5, which can provide 30 meals for people who struggle with hunger and would otherwise go without. More info and tickets to View Brew Fest can be found at www.mihomepaper.com.