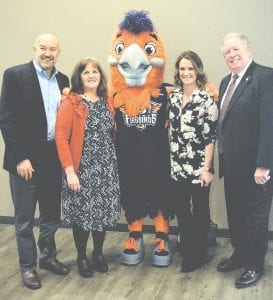 Attending the kick off were various media partners, such as the View Newspaper Group, in addition to representatives from Kroger, VG’s, SpartanNash and the Flint Firebirds, including mascot, Hot Wings.

William E. Kerr, president of the Food Bank of Eastern Michigan, gave a recap of the food bank’s activities for the last year, and what the food bank’s plans are for the holiday season.

Kerr said that once they started soliciting donations from area businesses, going business to business, and with the help of their media partners, the food bank raised $64,000 the next year. Kerr added that to date the holiday campaign has raised more than $11 million.

“This is the most successful single campaign in the community. Think about it, it is neighbor helping neighbor and business helping business,” Kerr said.

Next year, Kerr said, the holiday campaign will be held in the warehouse instead of the Hunger Solution Center, with all of the agencies the food bank works with present.

“The agencies are the conduit to the people, and the people, those people in need, are the ones we are truly here for,” he said.

“The goal is similar to last year’s,” Kerr said. “But for the last two years we have been impacted by water, But the food bank still needs to provide food to those in need. This goal is very, very attainable.”

Cathy Blankenship, vice president of the food bank, in detailing the holiday campaign, said that funds are raised through the cooperation of media, grocery and financial partners. The events put on by these partners raise money and awareness for the food bank.

“We at the food bank are humbled by the support of the community, and we couldn’t do what we do without you.”

Anyone interested may donate directly to the Food Bank of Eastern Michigan by calling 810-239-4441.