Food Bank of Eastern Michigan chairman of the board Claude High (from left), president Bill Kerr, board member Tony Burks, and retired employee Jim Eby at the Holiday Campaign Partner Brunch hosted by the Food Bank on Jan. 24 at their Hunger Solution Center. Burks was honored as Volunteer of the Year at the View Brew Fest last fall. Eby worked for the Food Bank for 29 years, from 1984 until 2013.

FLINT — The Food Bank of Eastern Michigan hosted a brunch on Tuesday, Jan. 24 to celebrate their 2016 Holiday Campaign that raised nearly $735,000, and to recognize Food Bank supporters and partners.

Claude High, Chairman of the Board of Directors for the Food Bank of Eastern Michigan, President, Bill Kerr and Cathy Blankenship, Vice President of Development and Communications along with Food Bank board members, employees and volunteers welcomed representatives from nearly three dozen businesses, colleges, community institutions and agencies to the Food Bank’s new Hunger Solution Center on Howard Street.

In his opening remarks at the event, Kerr noted, “For the past 20 years, since 1996, the community has generously provided over $10 million dollars during the Food Bank’s Holiday Campaign. These timely funds support all of the 417 partner agencies, throughout our 22-county region, immediately after the holiday season when our resources are diminished.” 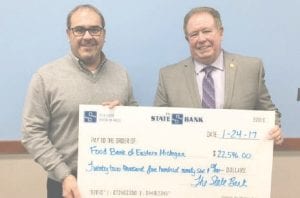 Ron Justice, President and CEO, The State Bank presents Food Bank of Eastern Michigan president Bill Kerr with a check for from funds raised by the bank during the 2016 Holiday Campaign.

Kerr thanked year-round partner United Way of Genesee County, their CEO Jamie Gaskin and Director of Community Impact, Jamie-Lee Venable, for a donation of $152,000 that funded trucks and equipment needed to distribute more than 27 million pounds of water last year. The United Way also partnered with several other funders to provide an additional $300,000 to support the Food Bank’s HELP Centers that were established in response to the Flint Water Crisis.

The Michigan Department of Health & Human Services (DHHS) was also recognized as a year-round partner that provided more than $1 million to fund mobile nutrition trucks for Flint’s hardest hit neighborhoods. That effort was led by Sheryl Thompson, DHHS Deputy Director of Field Operations, who had previously been recognized with the “Beacon of Light” award by the Food Bank Council of Michigan. Thompson also successfully pushed for allocation of an additional $1 million by DHHS in 2017 to continue the food trucks that distribute high nutrient, lead-mitigating food products, fresh produce and dairy.

The Charles Stewart Mott Foundation was recognized as a year-round supporter that joined with the United Way of Genesee County, the State of Michigan and the PepsiCo Foundation to support the HELP Centers.

Halo Country, the corporate parent of local Halo Burger locations, and its owners Daniel Stern and Chance Richie, were recognized as a new year-round partner. They sponsored 12 fresh produce trucks through personal contributions and a fundraising program at their stores.

Van Dyk Farms of Swartz Creek was recognized as a new Farm Partner that provided 41,000 pounds of lettuce to the Food Bank last year.

College Partners Baker College, Kettering University, Michigan State University Extension, Mott Community College and the University of Michigan — Flint were recognized for collecting more than 2,500 pounds of food and raising more than $1,000 in cash donations through “College Town” initiatives during the holidays.

Community Partners Flint Institute of Arts, Flint Cultural Center and the Flint Firebirds were recognized their various food collection and fundraising activities including the FIA’s annual Empty Bowls event, the Cultural Center’s Red, Whites and Brews fundraiser and the Firebirds’ support of the School Backpack program and food collection drives.

Blankenship recognized the Food Bank’s Corporate Partners including: VG’s/Spartan Nash, sponsors of the Red, White and Brews that has raised nearly $236,000 since 1997; Kroger, that has generated more than $910,000 over the last 12 years; Big John’s Steak & Onion; and Marshalls / TJ Maxx.

Skaff Furniture president Dick Skaff was on hand to be recognized for his company’s 2016 Save and Share campaign which raised $11,000 each for three different charities including the Food Bank.

Financial Partners Security Credit Union, Genisys Credit Union and The State Bank were recognized for their initiatives and fundraisers supporting the Food Bank.

The State Bank made a formal check presentation to the Food Bank a few days following the brunch. Each year, the State Bank’s seven Genesee County branches participate in various fundraisers, from collecting donations from customers and painting parties to candle sales and restaurant nights, the branches have friendly competitions to see who can raise the most funds to support the Food Bank of Eastern Michigan.