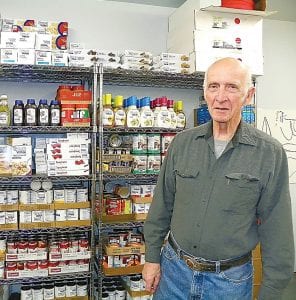 Jim McClung, a member of the Senior Citizens Center executive board, spoke during public comment about his volunteer work helping to buy groceries for the center’s pantry that supplies free food to an increasing numbers of needy seniors.

Pam Luna talked about working with Carman-Ainsworth students this month to collect food donations to be distributed from the senior center pantry to needy families of all ages.

The center’s food pantry has two food distribution areas – one for seniors and one for those who are not senior citizens.

“Now it is no secret to anybody that we are living in the toughest of times,’’ said McClung.

On a recent trip to the grocery store, the senior food shoppers spent nearly $1700, filling eleven carts that will be gone within about a week and a half, McClung said. 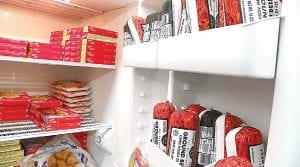 Frozen foods including ground beef, chicken and TV dinners newly stocked in the freezer awaiting those in need.

“The need has never been greater. A lot of people don’t want to admit they need it,’’ he said, adding that includes people he has known for years.

The food is paid for with $9300 in annual Community Development Block Grant Funds earmarked for people ages 60 and up countywide.

To date, the center has spent $6872 of the annual $9,300 CDBG allocation which renews in July, said Bob Moore, who runs the pantry and also is married to Linda Moore, senior center director. Moore said he would like to see funding for the program increased to $11,000 a year in the next three-year CDBG funding cycle.

Food is available for any senior ages 60 and up, regardless of income or whether they live in Flint Township, but Moore tries to first serve the center’s low-income seniors. About 90 percent of them are elderly women, including widows living on limited income averaging less than $900 a month, he said. He sets a limit of one request per month to give as many people as possible an opportunity to get help, 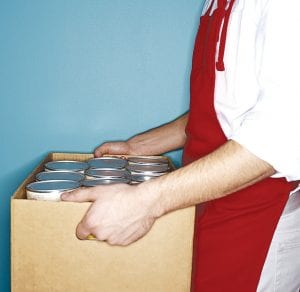 Moore said they try to keep some food in stock all the time but supplies run low between food trips about every three weeks.

They shop at Walmart, use coupons and try to buy what people want and need including vegetables, fruits, meats, cleaning products and toilet paper, he said.

“We have a lot of single parents come in with small children who maybe lost their job or got laid off or something or they are waiting for their bridge card to come due. We have a pantry for them,” Moore said.

Many have included fathers taking care of children who have left with tears in their eyes, Moore said of the gratitude expressed by those who are helped.

“It is nice to be able to bring a smile to a person’s face,’’ Moore said. They leave happy that they have something to eat and keep themselves clean.

Unlike the grant-funded seniors’ pantry, the community pantry is entirely dependent on donations. Carman- Ainsworth schools have helped with food drives including one being conducted this month, Moore said.

Luna, who is coordinating the drive, enlisted help from the CAHS National Honor Society, she said. She also got permission from the police and fire chiefs to set up food collection boxes at their respective stations throughout this month. Local churches are also getting involved.

Luna has conducted similar food drives for the past three years working with the C-A softball program.

She hopes to collect enough now so that food can be given to the same family more than once a month, she said.

Luna said she has also talked with the Eastern Michigan Food Bank about the senior center buying food there to help stretch the budget.

“Some people want to deny it but there is a lot of hidden poverty out there,” Moore said of the two food pantries. “I think we are seeing more of it now in the township than we have in the last five years.”

Some government leaders need to get out and go work in a soup kitchen to get a reality check, Moore said.