Football All-Stars to play Ohio in 2014 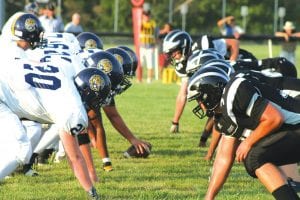 Michigan football players will line up against Ohio’s best next year.

STATEWIDE — Michigan’s best high school football players will no longer be banging helmets against each other next year.

The Michigan High School Football Coaches Association All-Star Game, which was played for the 33rd time last month, will be replaced in 2014 by an All-Star game against Ohio, according to an announcement Tuesday.

The inaugural Ohio-Michigan Border Classic will be played June 14, 2014, at Donnell Stadium on the campus of the University of Findlay. The MHSFCA and Ohio High School Football Coaches Association will each select 40 players and six coaches to play in the game. Selections will be announced in February.

Larry Merx, executive director of the MHSFCA, and Mike Mauk, treasurer of the OHSFCA, have announced that all profits from the game will be dedicated to the scholarship funds already established by their respective coaching associations.

The MHSFCA had been actively seeking a change in its annual contest, and Ohio coaches were also looking for another opponent after a long-running all-star game against Pennsylvania recently ended.

The Michigan All-Star Game had been played every year since 1981 in a format that matched a 44- player East squad against a 44-player West team. Players were nominated by their coaches and voted on by a selection committee. In the most recent game, the East defeated the West, 20-3, on June 22 at Grand Valley State University’s Lubbers Stadium.

Location is part of the reason the MHSFCA sought a change. The game was held for years at Michigan State University, but an NCAA regulation now prevents the contest from being played at a Div. I university. Besides Div. II Grand Valley, another recent All-Star game was played at Div. III Alma College. Next year’s game in Ohio will be played at another Div. II school. Findlay is in the same Great Lakes Intercollegiate Athletic Conference as Grand Valley.

The MHSFCA is lobbying the NCAA to change its rule, which states that Bowl Subdivision schools may host only scholastic events operated by scholastic entities, such as the Michigan High School Athletic Association. But the MHSAA had nothing to do with the All-Star Game because the players are no longer in high school and thus not under MHSAA jurisdiction.