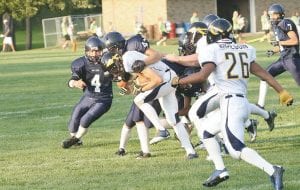 Tackling technique is one key aspect of the Heads Up program.

STATEWIDE — Ten days after announcing a new format for its All- Star Game, the Michigan High School Football Coaches Association made another significant announcement on July 25.

The MHSFCA said then it has endorsed USA Football’s Heads Up Football program to make the game better and safer for youth and high school players in the state. USA Football, based in Indianapolis, is the sport’s national governing body.

More than 2,700 youth football programs nationwide have adopted Heads Up Football into their programs this season.

“The MHSFCA is pleased to support USA Football’s Heads Up Football program,” MHSFCA executive director Larry Merx said. “The health and safety of our student-athletes is our No. 1 priority. Heads Up Football advances that priority in a smart way through coach certification for a better, safer game. We are proud to stand with USA Football in Michigan.”

The MHSFCA endorses the following guidelines, all of which are met through USA Football’s Heads Up Football program:

• Every head and assistant coach should be certified through a nationally accredited football coaching education program before stepping onto a youth or high school field.

• Every football commissioner, coach, game official, parent and player should recognize concussion signs and symptoms and know how to respond through Centers for Disease Control and Prevention recognition and response protocols.

• Every player should be taught tackling fundamentals that emphasize keeping the head up and out of the tackle.

• Every football coach, parent and player should know how to properly fit a helmet and shoulder pads.

“This is an extraordinary show of leadership by the MHSFCA that will further advance the safety of youth and high school-aged athletes who enjoy the fun, fitness and rewards of football,” USA Football executive director Scott Hallenbeck said. “We are changing for the better how the game is being played.”

In addition to the NFL and NFL Foundation, organizations that support Heads Up Football include the NCAA, National Federation of State High School Associations, American Football Coaches Association and the Sports and Fitness Industry Association.