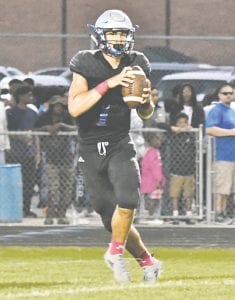 FLINT TWP. – The Carman- Ainsworth football team had no answer for an undefeated Grand Blanc offense in a 42-14 loss Friday.

Grand Blanc opened the game with a pair of quick touchdowns, the first when Tyler Leedom found Nicholas Erlenbeck for a 49-yard score with 11:48 remaining in the first followed by a 52-yard connection with Ethan Aspberger with 10:12 remaining. The Bobcats, leading 14-0, added one more touchdown in the opening frame when Leedom ran it in for three yards to put the team ahead 21-0.

The Cavs responded early in the second when Chris Coleman scored on a 4-yard scamper with 11:14 remaining to trail 21-7. Six minutes later, Dustin Fletcher found Idris Bray for a 42-yard completion and a touchdown to bring the deficit to 21-14, but that would be the last time Carman-Ainsworth saw the end zone for the night. With 1:52 remaining in the half, Grand Blanc scored on another completion from Leedom to Erlenbeck, this time for 44 yards, to enter the half ahead 28-14.

Early in the third, Leedom found Luke Bogan for a 28-yard completion to put the Bobcats ahead 35-14 with 10:01 remaining in the quarter. Grand Blanc then added one more touchdown late in the fourth on a one-yard run from Ryder Brotebeck for the 42-14 final.

Carman-Ainsworth actually outgained Grand Blanc in total yardage, picking up 342 yards to Grand Blanc’s 297, but was unable to turn that offense into points. Fletcher finished 10-for-23 passing for 184 yards and a touchdown, while also leading the team in rushing with 66 yards on 20 carries. Coleman picked up 49 yards on 11 carries and Joe’shawn Cheatham had 22 yards on seven touches.

Trent Barron led the Cavs’ receivers with two catches for 48 yards. Bray had 42 yards on one reception, Coleman had 33 yards on three catches and Jakobe Blount had one catch for 32 yards. Defensively, Tanayshio Dones led the team with seven solo tackles and two assists. Blount had four solos with two assists and Santos Gatica and KJ Reynolds each had two solos with one assist.