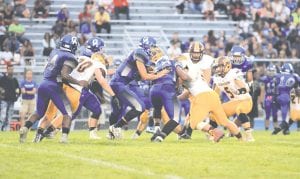 Carman-Ainsworth’s quarterback, Dustin Fletcher, looks for an opening during a game with Davison last season.

FLINT TWP. — Carman- Ainsworth’s varsity football team will embark on its 2017 season with a depleted roster that lost 31 seniors to graduation. Carman-Ainsworth finished 6-4 overall last season, with losses coming to Grand Blanc, Davison and Lapeer over the regular season, which were followed up by a 49-19 loss to Fenton in the pre-districts. The Cavaliers will play virtually the same schedule this season, with the only change coming in week five where they will face Bay City John Glenn instead of Flint Northwestern. Northwestern and Southwestern have combined their sports teams into a newly-branded Flint Jaguars.

Despite the massive loss of players, Carman-Ainsworth still had 20 other players on the team that were underclassmen and could return to the field this season. One such player is sophomore quarterback Dustin Fletcher, who shared reps under center last season and will look to take over the job full-time following quarterback Troy Brown’s graduation. Another notable player is running back Marshall Brooks, who had much success on the ground last season and will be a senior this year.

Calls for other preseason information about the team went unanswered. The Cavaliers will take on Grand Blanc today at Atwood at 7 p.m.