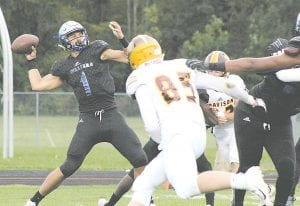 Carman-Ainsworth’s Dustin Fletcher fires off a pass during a Week Three game against Davison. Photo by Brandon Pope

FLINT TWP. – A fiery third quarter from the Carman-Ainsworth football team was not enough to hold off a fourth-quarter comeback from visiting Traverse City West. The Cavs ended up losing 19-13 Friday.

The scoring for both teams happened mostly in the second half, with the exception of a 38-yard field goal from Traverse City West at the 1:21 mark in the first quarter to put the Titans ahead 3-0. That lead held until the second half.

Early in the third quarter, Carman- Ainsworth took its first lead of the game on a two-yard run from Dustin Fletcher. A successful extra point by Mohamed Farhan put the Cavs ahead 7-3 with 10 minutes to go in the quarter. Fletcher then completed a 47-yard touchdown pass to Trent Barron at the 6:25 mark to help the Cavs take a 13-3 lead following a blocked extra point.

From then on, the scoring shifted entirely in favor of Traverse City West. The Titans closed the gap with a 26-yard field goal at the 11-minute mark in the final frame and followed it up with a three-yard rushing touchdown with 6:11 remaining to tie the game at 13-13. The Titans sealed the win with a five-yard rushing touchdown with just 28 seconds remaining to go ahead 19-13.

Dustin Fletcher finished the game 6-for-15 passing with 135 yards and a touchdown, while also rushing for nine yards on nine carries. Tanayshio Dones rushed for nine yards on three carries and Keshawn Keyes had seven yards. Barron led the Carman-Ainsworth receivers with three catches for 82 yards and a touchdown. Idris Bray had one reception for 24 yards, Jakobe Blount caught one pass for 15 yards and Mike Fletcher had one catch for 14 yards.