For love of animals 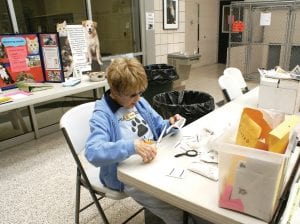 Jeanne Aaronson clips a VG’s receipt as part of her volunteer work at The Human Society of Genesee County.

GENESEE COUNTY — Jeanne Aaronson says since a young age, she’s always been in the middle of a pack of dogs.

“This is the high point of my week; something I can do for someone else. It’s my one stress free day,” says Aaronson, who has volunteered every Friday for the past nine years.

Her duties have changed over the years as her vision has deteriorated, from leading animal education classes and pet therapy sessions to clipping receipts, folding laundry and spreading newspapers.

She now uses a magnifying glass to use the scissors.

“… It is very labor intensive for her. She never complains. Ever,” said Terry Rozyla Ashley, volunteer coordinator.

Aaronson, a mother of three children, eight grandchildren and five great-grandsons, is known affectionately around the shelter as “Jeanne Beanie.”

“She’s done a little bit of everything. She was already well established by the time I got here,” explains Ashley, who fondly recalls once taking 19 puppies to Courtland Center with Aaronson for a pet education class.

The death of Aaronson’s fourth dog — a Collie — prompted her to begin volunteering at The Humane Society.

“He was a kid magnet,” Aaronson said of her

Collie. “Kids would come out of the woodwork to pet him. I felt like the Pied Piper. After he died, it was a terrible void and I needed something to fill that.”

She quickly signed up at The Humane Society and began bringing therapy dogs to local psychiatric wards and inpatient and outpatient Alzheimers patients.

She had experience, working at Hurley for 16 years, and the necessary patience — she taught oboe at the Flint Institute of Music and in private lessons for more than 50 years.

“It was as much for the staff as it was for the patients,” Aaronson said. “It was a welcome break for them.”

Society. After becoming legally blind a few years ago, she had trouble lining up transportation to and from the shelter, finally getting a driver from a volunteer agency.

“It took a year to figure out how to get back here,” she said. “I missed not being able to come.”

Aaronson has been in contact with her beloved dogs since her mother got her a cocker spaniel at the age of 8.

The family hid the dog from their father, who wasn’t much of a dog lover.

“We put the dog in a carton under the stove and hid the dog food at the top of the closet,” Aaronson said. “My dad discovered the dog food one day — it was in the post-Depression era — and he said, ‘I knew things were bad but not that bad.’ After that, we had to tell him about the dog.”

After their father put up an ultimatum, the family held a meeting where they picked the dog over him.

“My dad was a prince,” Aaronson said. “The dog stayed and we’d catch him petting him when he thought no one was looking.”

And she’s impacted perhaps hundreds of other dogs’ lives. From receipts she trimmed last year, The Humane Society was able to collect more than $14,000.

“The animals here in our shelter are the lucky ones. I feel so good knowing what my tiny job here contributes to,” Aaronson said of her volunteer hours. “The people here are top drawer. We laugh because we’re volunteers with college degrees unfolding newspapers.”