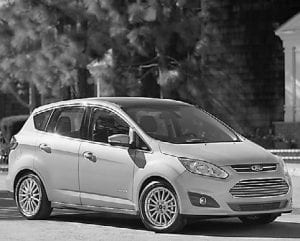 The C-MAX Energi plug-in hybrid and CMAX Hybrid combined sales have surpassed that of the Toyota Prius plug-in and the Prius v during November, the first full month both C-MAX hybrids were available.

The C-MAX has been named a finalist in the category of the North American International Auto Show Car of the Year Award.

A total of 4,848 C-MAX hybrids were sold in November compared with 4,456 Toyota Prius plug-in and Prius v hybrids. The C-MAX sales figures helped Ford achieve its best hybrid sales month ever in November with 6,985 delivered.

“The C-MAX hybrids are off to a great start and our dealers and customers, especially in California, cannot get enough of them early in the launch,” said Dave Mondragon, Ford’s general marketing manager.

Ford reported that its dealers in California say customer reaction to the C-MAX hybrids has been phenomenal.

“Because Ford has so perfectly hit the nail on the head with C- MAX hybrids, we have a tremendous number of former import buyers in the dealership every weekend who say they are ready to purchase a domestic vehicle,” said Tim Paulus, owner and president of The Ford Store Morgan Hill, located just south of San Jose in Northern California. The Ford Store Morgan Hill bought a 2013 Prius v and gives customers the chance to drive and compare it with a C-MAX. Paulus says not a single customer prefers the Prius v over the C-MAX hybrids. “We really weren’t sure if customers in Northern California would give C-MAX hybrids a shot because the region has traditionally been import-heavy,” says Paulus. “But they truly love the vehicle, so it’s very exciting.”

“We are getting more and more questions about C-MAX every day – including from quite a few Prius owners.”

The strong momentum now carries into 2013, as C-MAX Energi and C-MAX Hybrid will kick off the year as Official Cars of the 2013 International CES, the world’s largest annual innovation event, scheduled Jan. 8-11 in Las Vegas.

The 2013 CES is made for the all-new line of C-MAX – fitting in among the newest TVs, tablets, cameras, sound systems and just about all things.