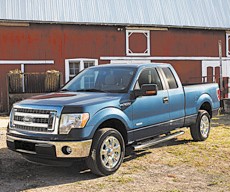 The Ford F- 150 was declared by Cars.com to be the “most American” vehicle made today, with 75 percent domestic- parts content and strong sales.

Cars.com’s list of the “most American” automobiles include a couple made in Michigan.

The Ford F-150, manufactured in Dearborn, topped Cars.com’s list. The Dodge Avenger, made in Sterling Heights, was number three on the list.

Ford F-150 Marketing Manager Eric Peterson said that the folks at Ford were pleased to make the top of the list.

“When we heard about this, we were excited,” Peterson said. “It’s great to learn that we’re number one on this list.” He said the news is especially exciting because the F- 150, made in Dearborn and Kansas City, is such “a workhorse around America.”

He added that not only is it made in Dearborn, it’s also designed there and many of the more than 250 supplier partners who supply the parts for the vehicle are in Michigan.

Dodge spokesperson Kathy Graham said that the people at Chrysler were pleased to see the Avenger high up on the Cars.com list because it’s a good car.

“The Avenger is a great mid-sized car,” Graham said. “It offers a lot to drive. And it’s just a bonus that it’s made in Sterling Heights. The city has been a great partner with Chrysler and, obviously, all the people who build it are a huge part of its success. We couldn’t do it without them and we’re proud to make an American car with American workers.”