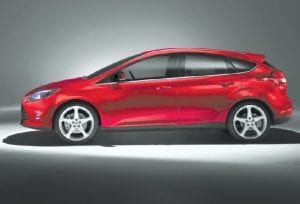 The Ford Focus is officially the world’s best-selling passenger car in the world with sales totaling 1,020,410 vehicles worldwide, outselling all other nameplates in 2012, according to Southfield-based automotive data firm Polk.

In fact, three of the 10 top-selling vehicles globally in 2012 were Fords – the F- 150 pickup was the third-best selling vehicle in the world. The Ford Fiesta came in sixth.

“Focus and Fiesta represent the culmination of our One Ford global product strategy,” said Jim Farley, Ford executive vice president, Global Marketing, Sales and Service. “Our global products are resonating with consumers – especially in the bestselling, most competitive segments – with their unique combination of fuel efficiency, high quality, rich content and fun-to-drive personalities. Through One Ford, we’re able to bring economies of scale and fantastic value to customers around the world.”

In addition to holding on to the sixth spot in global vehicle sales for 2012, the Fiesta earned the top spot as the world’s best selling subcompact car, with 723,130 registrations tallied by Polk for 2012. Combined sales of Fiesta and Focus totaled over 1.7 million vehicles.

F-150 sales were another cause of celebration. Ford Sales Analyst Erich Merkle said it’s been the best-selling pickup truck in the U.S. for 36 straight years, and was the third-best selling vehicle and top-selling truck in the world in 2012.