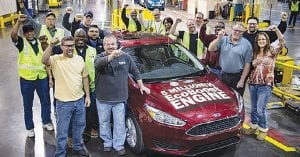 Ford’s 5-millionth vehicle with an EcoBoost engine, a 2015 Focus, rolls off the line at Michigan Assembly Plant in Wayne, Michigan.

Ford has hit a new production milestone with its fuel-efficient EcoBoost engine technology. Earlier this month, the 5-millionth vehicle with a Ford EcoBoost engine rolled off the assembly line at Michigan Assembly Plant in Wayne, Michigan.

EcoBoost was launched in 2009 on Ford Taurus SHO with the 3.5- liter EcoBoost V6. That year, 14,439 EcoBoost engines were manufactured.

In 2010, the first full year of EcoBoost production, 62,704 vehicles with the technology were built.

Production of the 5-millionth EcoBoostequipped vehicle coincides with the first full year in which customers can choose EcoBoost-equipped engines on 100 percent of Ford’s passenger vehicles sold in the United States. The fuel-saving technology is now available in every region the company serves.

Other members of Ford’s global EcoBoost family include the 1.5-liter, 1.6-liter, 2.0-liter and 2.3-liter four-cylinder engines, and the powerful 2.7-liter and 3.5-liter V6 engines.

Focus ST, with its 252-horsepower 2.0-liter EcoBoost, has a top speed of 154 mph, yet still returns EPA-estimated fuel economy of 32-mpg highway.

Production of Focus RS with 2.3- liter EcoBoost is planned to begin later this year.