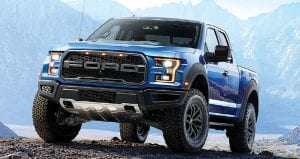 “The Raptor was built to live off the road,” said Joe Hinrichs, Ford executive vice president and president, The Americas.

Hinrichs said the Raptor is the toughest, smartest and most capable truck Ford has, and it doesn’t sacrifice comfort.

The Raptor starts with a purpose-built frame – the backbone of the truck – that is the strongest in the F-150 lineup, featuring more high- strength steel than the outgoing Raptor.

Forged from high-strength, military grade, aluminum alloy that helps save more than 500 pounds of weight, Raptor’s exterior design was inspired by Ford’s performance heritage in off-road racing that includes Best in the Desert, Lucas Oil Off-Road Racing Series and the famous Baja 1000.

Raptor is powered by Ford’s new, second generation, 3.5-liter EcoBoost engine, a Raptor exclusive in the F-150 lineup. It will be paired with a new 10- speed transmission for improved efficiency.

“The new transfer case offers better traction for a greater variety of terrain at low and high speeds – both on-road and off- road,” said Jamal Hameedi, chief engineer in Ford Performance.

– from snow to mud, sand and more, Hameedi said.

The Raptor will be built at Dearborn Truck Plant. It goes on sale in the fall of 2016.