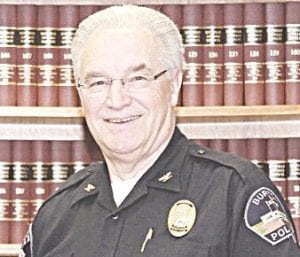 BURTON — John Benthall loved being a police officer and was an inspiration to many who wanted to pursue a career in law enforcement.

Benthall, 78, former police chief for the City of Burton and deputy police chief in Flint, died May 2 at his home in Burton.

A private service will be held. Memorial contributions may be made to a charity of your choice. A public gathering will be held later where friends and family can share memories.

Retired Burton Police Chief Tom Osterholzer remembered Benthall fondly and said what he admired most about him was his moral strength and his steadfast commitment to honesty and integrity.

“He set the moral compass for the department to true north, and it never wavered,” said Osterholzer, who is now the police chief in Grand Ledge. “He truly loved being a police officer, he was very proud of his service to both the Flint and Burton community, and above all he loved his wife and children.”

Osterholzer said Benthall was a great example for other police officers to follow and said without question, he would not be where he is today if it were not for Benthall.

“He will be missed dearly,” said Osterholzer.

Benthall was hired by the city of Burton as police chief in 1992 and retired in 2001. He returned to that position in 2007 and retired again in 2012, leaving the department under Osterholzer’s leadership.

Former Mayor Paula Zelenko said Benthall returned as chief under her predecessor, Mayor Charles Smiley, but she asked him to stay on as chief at the start of her administration. She said he was a great help to her during the transition to Osterholzer becoming chief in January 2012.

Zelenko said she knew Benthall for 30 years and considered him an honorable man who was dedicated to his family and the community.

“He was source of strength to me and was a comfort to me during times of trouble,” she said. “He was there for me when both my parents died. He was always someone I could count on personally or professionally. He was a sounding board and a voice of reason.”

Mayor Duane Haskins said he considered Benthall to be a kind, caring and compassionate person. He said he served on the fire department when Benthall was hired the first time as police chief and found he had a lot of knowledge to share.

“He has a lot of knowledge,” said Haskins. “Most people who met him knew that right out of the chute. He was a nice, kind guy. I had a lot of respect for that man.”

Schecter said he met Benthall in 1975 when he returned to the department after being on special assignment for five years.

Schecter was working in Internal Affairs when he was asked who he wanted to partner with.

“I picked John,” he said. “He had an excellent reputation and was well liked by everyone. We spent several years in Internal Affairs before going our separate ways in the department. But we still saw each other as we worked our way up the ranks together.”

In 1992, when both Schecter and Benthall were serving as deputy chiefs in the department, Benthall retired to take the job as Burton Police Chief.

Over the course of their friendship, Schecter said they talked a lot about their mutual passion for motorcycles. Once their children had grown, the two friends began to ride again.

“John had a motorcycle, so did I, we had gotten away from that while our kids were growing up,” said Schecter. “One day John pulled into our driveway on a new Harley-Davidson motorcycle…and that was all it took to start the fire again.”

Benthall and Schecter, and their wives, Karen and Judy, traveled a lot on their motorcycles, whether it was up north to Traverse City or on multi-state trips.

The two were instrumental in the founding of Bikes on the Bricks in downtown Flint and served on the board of the organization.

As a police officer, Schecter said Benthall was friendly and easy to get along with.

“That’s why I chose him for my partner in Internal Affairs,” said Schecter. “You couldn’t get a better reputation.”

As a friend, Schecter also said Benthall was the best.

“We were good friends ever since we met,” he said. “I miss him.”

He loved riding and traveling on his Harley Davidson. Benthall was a member of St. John the Evangelist Catholic Church and enjoyed traveling on several European trips with fellow parishioners.

He always had his nose in a book and as of late enjoyed spending time with the “St. Andrew’s Scotch Society”, a monthly scotch tasting with his friends.

He was preceded in death by his son, Brett; his parents and in-laws.