LINCOLN, Neb. — Athletics has been the vehicle chosen by many a person looking to traverse the road less traveled. For Carman-Ainsworth grad Shimmy Gray-Miller, that path has led her to the University of Nebraska, where she recently completed her first season as an assistant coach for the women’s basketball team after spending the past 12 years trying to help elevate a trio of other National Collegiate Athletic Association Div. 1 programs.

“My first coaching job was actually in 1994 when I was a counselor at a Boys Home in Clinton, MI. Boysville was a medium security detention center for boys aged 12-17. I coached the high school team there at C. Thomas Moore HS,” said Gray-Miller. “I had to earn the respect of the boys and I did that by beating them on the court. Once I showed them I could actually play the game I was trying to coach I didn’t have too many problems getting their attention. My second coaching job was an assistant at Bellevue Community College outside of Seattle.” 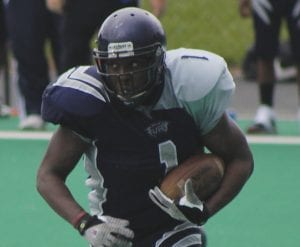 Carman-Ainsworth grad Richard Beaguard runs the ball up the middle for the Flint Fury.

After a playing career that started with Gray-Miller competing in two sports during her time with the Cavs, she first got into the other side of college basketball from 2000-03 when the University of Washington hired her as an assistant coach for its women’s squad. Highlights for the Huskies during that time include qualifying for the NCAA Tournament and winning the 2001 Pacific Athletic Conference-10 title.

“UW was actually my third coaching job. And I got it because I built a relationship with the coaching staff and team by working their summer camp two years straight,” Gray-Miller said. “I had actually accepted a position as a graduate assistant at a D2 school in (Pennsylvania) but on the way out there my car broke down. I was stuck in Seattle for a couple of days waiting for a part to come in and the UW coach called and said they had an opening and asked if I had an interest. You bet I did. The rest is history.”

What came next for Gray-Miller was a move to become an assistant coach at league rival Arizona from 2003-05. While a member of the Wildcats coaching staff the Carman-Ainsworth product helped the squad qualify for the NCAA tourney twice and win its first-ever PAC 10 championship in 2004.

“I was very active as an asst at UW, conducting various clinics throughout Seattle and volunteering to teach a clinic each year at our annual PAC 10 Tournament. Along the way, I caught the eye of Arizona (head coach) Joan Bonvicini and she reached out to me,” said Gray-Miller. “I had always admired her team and their relentless style of play from afar and it was a step up professionally so I jumped at it.”

The end result for Gray-Miller was getting named the head coach from 2005-12 at Saint Louis University, where she helped foster the talents of seven All-Atlantic 10 Conference players. During that time the Billiken’s also had one Freshman of the Year and one Most Improved Player.

“I enjoy watching their daily growth. It could be the tiniest of things, maybe a more aggressive box out or the smallest adjustment in their footwork, but when I see it manifest, it’s just the greatest sense of accomplishment,” Gray-Miller said.

“I love the correspondence with the recruits. I’m responsible for our weekly mail outs to our recruits and that means I get to be creative in how I project our school, program, city, and conference to our recruits,” said Gray-Miller. “You have to be fresh and innovative while staying within the confines of our NCAA rules and it can be challenging but a lot of fun. I love when a recruit contacts me to say they love a certain mail out or they really look forward to reading our mail. My least favorite part is the obscene amount of travel I do. I’m probably on the road three to five days a week during the season.”

In between her present position and graduating from Carman-Ainsworth, Gray-Miller went on to play professional basketball for one season for a first-division club team in Coimbra, Portugal, known as Olivais Futebol Clube. This was after a tour of duty as the team captain for the women’s basketball team at the University of Michigan, where she won the Bob Ufer Quarterback Club Award for leadership and dedication in 1994.

“What stands out to me the most was the competitive Big 9 conference. I loved going into every game competing and knowing it would be a tough battle,” Gray-Miller said. “Overall, I have a tremendous amount of pride being from Flint. I even named my dog Flynt after my city because my mom told me to never forget where I came from. We are tough and blue collar and I brought that on the court with me every night and that still is the mentality I have as a coach. We don’t give up or give in and we fight to the finish. That’s the Flint way.”