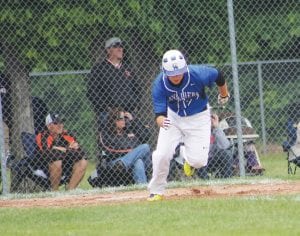 Carman-Ainsworth’s Colin Heaton runs to first base during a game against Flushing in the 2012 season.

FLINT — Some of the area’s finest baseball players have found their way to Flint to play for Mott Community College, with Carman- Ainsworth graduate Colin Heaton earning some playing time for the Bears at pitcher.

Mott (4-5) most recently suffered an 11-1 loss to St. Cloud Technical & Community College during its annual trip to Orlando on March 12. Mott, however, has been dominant in some of its match-ups, including a 10-0 drubbing of Mesabi Range CTC on March 9.

Heaton, a sophomore for the Bears, has appeared in two games so far, earning a victory for his squad in one game. Heaton has hurled 3.0 innings, allowing just three hits and one run with one walk. He hasn’t recorded any strikeouts yet this season, but does post a nice 3.00 earned-run average.

Heaton, however, is just one of the several pieces put together during an impressive recruiting campaign over the past two seasons by the Mott baseball coaching staff.

Several Davison grads also appear on the roster, led by freshman Maverick Prine, who has a sparkling .357 batting average with 10 hits in 28 at-bats over nine games. Prine has scored five times as well as collecting five doubles.