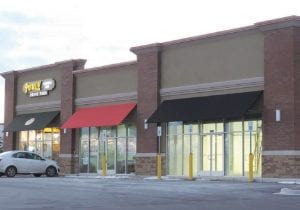 FLINT TWP. — A third tenant has signed up to fill the last vacancy in a newly built strip plaza on Miller Road.

A cellphone store has claimed that final space, according to Tracey Tucker, township economic enhancement director.

The cellphone store will join a Potbelly’s Sandwich Shop that opened in September and a Five Guys Burgers and Fries restaurant currently in the build-out phase.

The cellphone brings to full occupancy a redevelopment that began last year with the razing of a former car dealership and construction of two buildings on the site.

One is a 7,163 squarefoot Texas Roadhouse that opened in August 2015. The 4,840 square-foot strip mall is located on an adjacent 2-acre site.

Previously, the five-acre site was home to three different car dealerships. The longest operating one was Chinonis Chrysler Plymouth Dodge from 1970 until 1996.

Then, the Genesee Valley Dodge dealership operated at the site until 2012 when it was bought by Serra Automotive, closed, relocated and renamed Al Serra Chrysler-Dodge-Jeep- Ram. Jim Waldron briefly opened a used car dealership on the site in 2012- 2013.