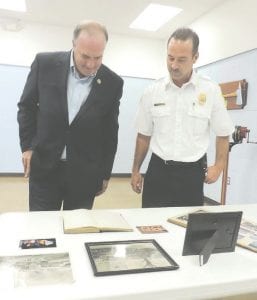 Dan Kildee spent some time at fire station one looking through old log books and photos that preserve his grandfather’s legacy as the township’s first fire chief.

FLINT TWP. — As a boy, U.S. Congressman Dan Kildee spent a lot of time at the township fire station with his grandfather Jack Maxwell, who served as the first township fulltime fire chief for 25 years – from 1947 to 1972. Maxwell’s legacy lives on in photographs, documents and policies still in place at the fire department. That paved the way last week for a trip down memory lane for Kildee, who visited Station One on Reuben Street for a hands-on look at what entails being a firefighter today. He looked over scrapbooks, datebooks and other memorabilia including a photo of his granddad standing in front of a red chief’s car. “That’s his handwriting,” Kildee said while looking through a 1949 records book. He recognized the handwriting from when his grandfather signed his birthday cards. Kildee recalled riding in the chief’s car including going on a fire run when a call came in. Before the mall and commercial development came in the early 1970s, the township was more rural and many fire runs were for simpler things like chicken coop fires. Kildee said his grandfather allowed him to slide down the fire pole only once but never let him play with a fire hose. So, he got a charge out of suiting up in 50-pound fire gear, donning a breathing mask and feeling the power and pressure of manning a water hose. He also tried his hand at extraction tools used to get trapped victims out of cars. Fire Chief Tom Stadler and Assistant Fire Chief Mike Burkley escorted Kildee on his tour, including providing equipment and explaining how to handle it. They also shared quite a bit of department history that included Maxwell. Looking through old photos of many unidentified people, Kildee speculated that his mother Margaret, Maxwell’s daughter, could identify many of those people. She was 13 when Maxwell became fire chief and “she knew everybody.” Chief Stadler said that many of the policies put in place by Maxwell still exist today such as reporting for duty times. “He was the funniest guy,” Kildee said, recalling the “great big radio” Maxwell kept on his bedroom dresser to alert him to fire calls. Firefighting radios are much more compact nowadays. Kildee also credited his interest in public service to “Papa.” “I’ve been in in politics my whole life,” he said. “People assume it was because my uncle (former U.S. Congressman Dale Kildee) was in politics and that is why I was drawn to it. But it was my grandfather being the fire chief, I was basically raised with the idea that you served your community.” When he’s not helping extinguish political fires in Washington D.C., Kildee is a Flint Township resident. Maxwell died in 2008 at age 96, two years after he bought a new car, Kildee recalled with a chuckle.