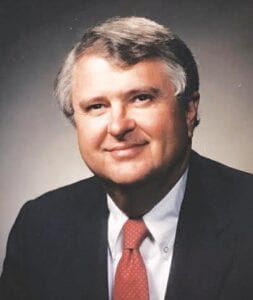 FLUSHING — Flushing businessman Thomas McNally Sr. is being remembered for his impact on the community and his support of small businesses in the Flushing area.

McNally, former owner of the McNally Chevrolet-Buick dealership, died on July 3 at the age of 86. Due to COVID-19 restrictions, his family is planning a private service at Rossell Funeral Home in Flushing.

McNally was born in Flint on Oct. 5, 1933, the youngest son of Frank and Pearl (Cuthbertson) McNally. He grew up in Flushing and graduated from Flushing High School. He then attended Michigan State University, where he was an active member of the Delta Chi Fraternity.

In 1954, McNally met the love of his life, Sue Oppermann, on the train to the Michigan State Rose Bowl game. The couple was married on June 18, 1955 and would go on to enjoy 65 years together.

After graduation, McNally served in the United States Navy for three years. Upon returning home, he and his brother Dick ran the family car business, which their father Frank McNally founded during the 1950s. The McNally Chevrolet-Buick dealership, located on the corner of Flushing and Pierson roads, soon grew into one of the largest private employers in Flushing.

McNally supported his community by providing vehicles for parades in Flushing and cars for driver’s training courses at Flushing High School. He and his family also created the McNally Family Scholarship, which is awarded to FHS students who plan on attending Michigan State University.

McNally was active in the Michigan Automobile Dealers Association and served as its president in 1991. He would continue to operate the family business until General Motors purchased the dealership in 1996.

Thomas McNally Jr., who worked at the dealership during the 1980s and 1990s, said that his father taught him the values of practicing honesty and quality customer service.

“He wanted us to take care of our customers, because those are the things people will remember when they do business with you,” he said. “My dad also truly believed in supporting locally owned small businesses, which are the backbone of the community.”

Outside the car business, McNally loved golf, fishing, travel and spending time with his family. One of his favorite getaways was a yearly fishing trip that he took with his brother Dick to Canada—a pilgrimage they made for over 40 years.

McNally, renowned for his love of MSU athletics, was also a season ticket holder for Spartan football games and spent many Saturdays with his wife in East Lansing to cheer on the Green and White.

Above all, McNally’s greatest joy was his family. He will be deeply missed by his wife of 65 years, Sue; children, Tom and wife Ellen McNally Jr., John and wife Candice McNally; grandchildren, Michael (Sarah), Jaclyn, Doug, Patrick (Bridget), Casey and two great-grandchildren, Olivia and Madeline. He will be also missed by many nieces, nephews, brothers-in-law and dear friends.

In lieu of flowers for his funeral, McNally’s family is asking the community to donate to the charity of their choice.