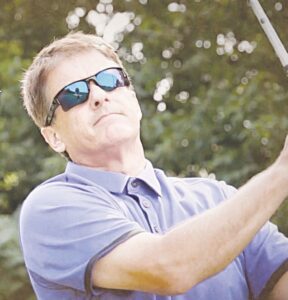 Bowman, who’s the head golf professional at the Oakhurst Golf and Country Club in Clarkston, received a sponsor’s exemption to play in the fourth edition of the Ally Challenge at Warwick Hills Golf & Country Club from Aug. 27 to 29.

Although Bowman had a bit of a rough outing—finishing 18-over-par—he said that he’ll cherish the experience of playing at a PGA Champions Tour event.

“This is just about seizing the moment, having some fun, making my sponsors proud (and) the people that selected me,” he said. “I just want to play golf, and to do it at this stage is unbelievable.”

Bowman last competed at Warwick Hills in the 1990 Buick Open. He also played in two National PGA of America Championships and was a member of the NIKE Tour (now the Korn Ferry Tour) in 1993.

Born and raised in Flushing, Bowman graduated from Flushing High School in 1981 and played for the school’s golf and hockey teams. Bowman also participated in the Flint Junior Golf program, gaining valuable experience at Warwick Hills and other local courses—including the Flushing Valley Golf & Country Club, where his father was a member.

Ironically, Bowman didn’t start playing golf until he was 15-years-old. Hockey was his number-one sport, thanks in part to the “hockey blood” passed down to him by his grandfather Scotty Bowman, who played for the Detroit Red Wings in the 1930s.

Bowman said that his father ultimately encouraged him to pick up golf and try out for Flushing’s Junior Varsity golf team.

“My Dad said, ‘If you make the JV team, I’ll give you my clubs,’” Bowman said. “That was the start of it all. It was the greatest decision I ever made.”

Bowman, 57, played his collegiate golf at Western Michigan University before making a run at the pro game in the NIKE Tour.

When his professional playing days ended, Bowman transitioned to becoming a full-time golf professional and teaching the sport to others. He’s served as a PGA Professional at Oakhurst since the club’s inception in 1998, giving golf tips to the likes of Kid Rock and former Detroit Red Wings legends like Joey Kocur, Darren McCarty and Mickey Redmond.

Apart from golf instruction, Bowman’s main tasks at the course include overseeing financial and personnel decisions, running tournaments and handling merchandising. He said that becoming a head golf pro has been a viable and rewarding career path.

“If you love smelling grass every day and helping people (with their golf game), and you have a good business sense, it offers a good quality of life,” he said. “Oakhurst is like another son to me.”

On Sunday, Bowman presented a $3,500 donation to the United Way of Genesee County in recognition of his exemption into the Ally Challenge.

Bowman said that while he doesn’t get up to Flushing very often, he was able to attend his 40th FHS class reunion a few weeks ago. He said that he’ll always be grateful to the community that helped to mold his golf game and career path.