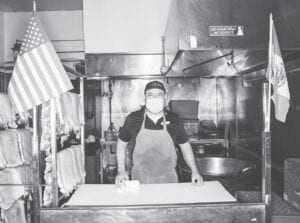 SANTA FE, NM — Former Flushing resident Eric Cousineau is using his photography skills to shed light on the heroic but often overlooked efforts of essential workers during the COVID-19 pandemic.

Cousineau, a freelance photographer who lives in Santa Fe, NM, has been taking images of essential workers like nurses, mail carriers, dentists and grocery store employees in his community since the COVID-19 pandemic-related shutdowns began last year. Along the way, he’s discovered his niche as a photographer and gained national recognition for his work.

In March 2020, Cousineau was commissioned by CENTER, a non-profit arts organization that supports up-and-coming photographers, to photo-document the lives of essential workers around the Santa Fe area. A year later, his project has continued and expanded to include photos of medical personnel in the COVID unit of Saint Vincent Hospital in Santa Fe and volunteers at homeless shelters around the city. 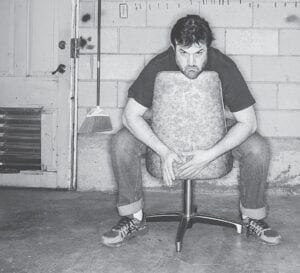 During his shoots, Cousineau captured essential workers performing their everyday tasks and set their portraits in a black and white atmospheric style. He said that many of his subjects felt honored to be part the project and getting noticed for the jobs they’re doing through the pandemic

“As essential workers, they’ve had to keeping going to work instead of staying safe at home,” said Cousineau, who also works at a Trader Joe’s grocery store in Santa Fe. “Many are grateful to be employed, but they’re having to put their lives at risk, not knowing if they’ll get infected. With my own job, it (the pandemic) definitely adds a level of mental exhaustion.”

When the project is finished, Cousineau said that the Form & Concept gallery in Santa Fe is planning to display his photos in an exhibition.

While it was intended as a local photo series, Cousineau’s work has gotten national attention from major photographic arts publications. Earlier this year, his photo of a meat department associate at a small Latin American grocery market in Santa Fe won first place in the N.Y. Photo Curator’s 2020 Global Photography Awards.

Cousineau, 44, said that he’s happy to receive global and national exposure for his work, but he wants the focus to remain on the sacrifices and dedication shown by essential workers throughout the country.

“I hope that these photos will cause us to have more gratitude towards occupations like grocery store workers and bus drivers,” he said. “People that we would normally sweep under the rug or take for granted. The series is showing the workers and their jobs that never seemed important before, that we are now all relying upon more than ever during the pandemic.”

Cousineau, a 1995 Flushing High School graduate, moved to Santa Fe in 2001 and completed his Bachelor of Fine Arts at the now defunct Santa Fe University of Art and Design in 2003. He then operated a wedding and event photography business for many years until the COVID shutdowns hit in 2020.

Although the pandemic forced him to shutter his business, Cousineau said that the experience was somewhat of a blessing in disguise, causing him to pursue a new route with his photography.

“My wedding photography business did really well for a while, but more competition made it harder and harder, and I wasn’t happy doing it anymore,” he said. “The essential worker project has really started to launch my career and given me an opportunity to develop my own style.”

In addition to pursuing the photo series in New Mexico, Cousineau said that he’s tentatively planning to take photos of essential workers in the Flint area and Genesee County when he returns home this summer. Essential workers or essential businesses that might be interested in participating in his project can contact Cousineau at eric@ericcousineauphotography.com.

To learn more about Cousineau’s photography and the Essential Worker series, visit ericcousineauphotography.com or his project Instagram page: @ essentialworkerproject. Prints from the series can be viewed and purchased at www.formandconcept.center/artists/eric-cousineau/.