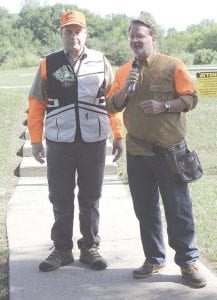 This year the event drew in 87 shooters and there were many sponsors of the event, including Williams Gunsight in Davison Township and the Tondu Corporation from Texas.

Several shooters were from the Disability Network.

Genesee County Clerk John Gleason, president and founder of the organization, said they texted him after the event with this message: “Can’t thank you enough, seldom get such a blessing. You made our day!! Thank you from Wheelin’ Team 457.” Also attending was U.S. Senator Gary Peters, who spoke with many of the shooters and he took part in the shooting event. The Gleason Community Foundation is a non-profit organization dedicated to promoting organ donor awareness. The money raised goes toward the annual organ donation essay contest, where $2,500 in scholarship money is given to the winners of the contest. 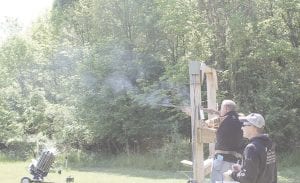 Shooters take to the course for a morning of clay shooting.

The next event for the organization is the Aug. 3 Donation Nation Road Race at Ascension Genesys Health Park in Grand Blanc Township.