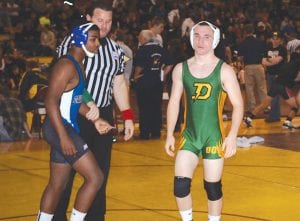 SAGINAW — The anticipation continues to build as the Michigan High School Athletic Association wrestling finals at the Palace of Auburn Hills from Feb. 28-March 2 gets closer and closer.

For Carman-Ainsworth, the second stop on its journey for individual titles came last Saturday at Saginaw Heritage regional No. 2-1 against the qualifiers from Davison district No. 3- 1 and White Lake-Lakeland district No. 4-1.

With seven wrestlers in action on the day, Tae Pendleton followed up his district title at 189 lbs. for the Cavs with a second-place showing that started with decision victories against South Lyon’s Jameson Donahue, 5-1, and Walled Lake Central’s Alex Slovel, 6-4, and ended with a loss in the finals to Clarkston’s Chris Calvano in 4:51.

Even though he’s just a sophomore, Malik Dawkins was also able to put his best foot forward for Carman- Ainsworth by finishing third at 140. Having fallen by pin to Davison’s Dominic Russ in 1:09 after downing Pontiac’s Davion Logan in 1:43, Dawkins went on to get the better of West Bloomfield’s Mario Giglio in 2:26 and Farmington Harrison’s Bobby Matthieson, 14-7.

The Cavaliers had a pair of fourthplace finishers, as well. This included heavyweight Jerron Thomas coming back from a round-one loss to Waterford Kettering’s Tommy Edwards, 14-5, with victories against Flushing’s Dustin Dowen in 4:45 and North Farmington’s Justin Shelton, 6- 5, prior to falling in the match for third place to Edwards yet again, 15- 10.

While Herbie Keskes may not have seen all the action he would have liked during the regular season, the 171- pounder has been making quite a name for himself with the Cavs this postseason and was the squad’s other fourth-place performer. Keskes didn’t have an easy path laid out for him at this event, either. That’s because, after getting bested by Brighton’s Nick Brish in 3:10, Keskes rose up and took out Waterford Kettering’s Zack Carter, 10-4, and Saginaw Heritage’s Kenny Bellmore, 12-7, only to end up falling to Brish once more, 12-2.

D’Mario Blue was another of Carman-Ainsworth’s representatives at 152 and lost to Clarkston’s Nick VanDemeer in 2:30 and Hartland’s Logan Vish in 3:56, Darion Vaughn was eliminated at 130 by Walled Lake Western’s Austin Murray in 1:06 and Midland Dow’s Cody Graham in 3:10. At 103, Demetric Hall fell to Farmington Harrison’s Michael Volyanyuck in 5:55, defeated Midland Dow’s John Hollingshead by default and got beat by Brighton’s Jackson Renicker, 6-1.

Because Carman-Ainsworth also won a team district title, the squad was in action on Feb. 13 at Davison team regional No. 103-1, beating Saginaw Heritage in the semifinals, 48-21, prior to getting eliminated in the finals by the host Cardinals, the second ranked team in the state for Div. 1 according to www.michigangrappler.com, 57-12.

Davison, 12-4, is now set to start the Div. 1 team finals on Feb. 22 as the second seed at Kellogg Arena in Battle Creek with a quarterfinals matchup against seventh-seeded Holt, 15-10.